Zabra Hexx is a jungle troll priest. He was the inhabitant of Scarlet Monastery before the Scarlet Crusade took up residence there.

The troll Zabra took up residence in the abandoned monastery that would later become Scarlet Monastery and learned the ways of the Light from the books within its library. He is found by knights of the Silver Hand, led by Alexandros Mograine, who confirmed his connection to the Light, saving him from being killed by Brigitte Abbendis. Zabra promises to never forget Alexandros' act of mercy.

Later, he encounters Darion Mograine, who at the time is mourning his father's death. Zabra suggests that the spirit of Alexandros Mograine has not passed on, claiming that he can still feel a connection to Mograine through the Light, though it has been obscured. When Darion asks him about Alexandros' whereabouts, Zabra tells him that he had seen a vision of a fortress floating above a burning city, and then vanishes mysteriously.[2] 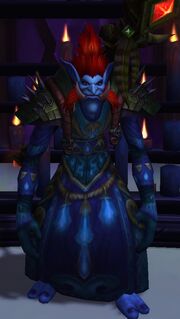 Zabra Hexx appears in Legion as a user of Void magic, though it is not explained why. As some of the best alchemists that the Conclave at Netherlight Temple had to offer, Zabra and Yalia Sagewhisper traveled to Azsuna to aid the Illidari on the front lines against the Burning Legion. Prophet Velen sent the High Priest of the Conclave to find them so they could prepare an extract that would grant him a vision of the future.[1] While in Azsuna, Yalia and Zabra were attacked by the local murlocs, and dropped the supplies they were delivering to the Illidari while they fled. The two were also separated in their fleeing.[3][4]

Zabra and Yalia's elixir would later help Velen to see visions of the Scarlet Onslaught and Cult of Forgotten Shadow joining the Conclave, and Balnazzar attacking Netherlight Temple.[7] 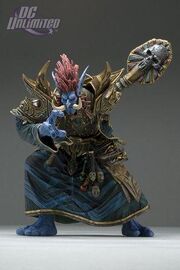