From Wowpedia
(Redirected from Zaela)
Jump to: navigation, search

Warlord Zaela was the leader of the Dragonmaw clan after its return to the Horde. A staunch follower of Garrosh Hellscream, she fought at his side during the Siege of Orgrimmar. When Garrosh was overthrown, Zaela joined the Iron Horde with him, and now leads the Ironmarch expedition within Blackrock Spire. 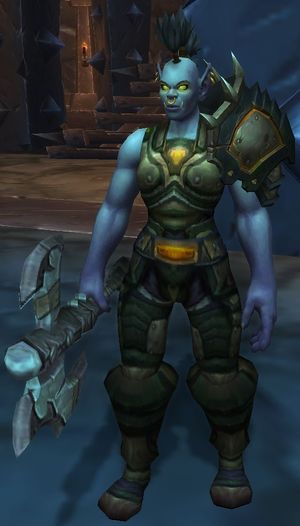 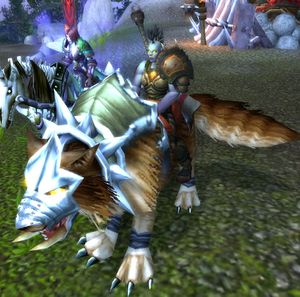 Zaela is first introduced alongside Gregor, chastising him for his reluctance to aid Garrosh Hellscream's fleet out of his fear of the current Dragonmaw Warchief, none other than Overlord Mor'ghor. Following the Horde's failed negotiations with the tyrannical Mor'ghor, Zaela finds and releases the player from their captivity, returning their confiscated gear.

Zaela is highly worried about the future of the Dragonmaw under the corrupted Mor'ghor, citing him as a traitor to his own blood, and that he and his fel orcs would bring about the destruction of the clan. She sends the player back to the Horde fleet, bargaining that if Mor'ghor is deposed, she and the true Dragonmaw would be the Horde's allies forevermore.

The Horde forces lay siege to Dragonmaw Port from the shore, and the Dragonmaw themselves take up arms against the fel orcs with supplies sent by the Horde fleet. The fight is taken directly to Mor'ghor, and with the help of the Horde, he is disposed of. Zaela announces that a new Dragonmaw dawns with his death. Meanwhile, the Horde and the Dragonmaw route out the remaining fel orcs, and Garrosh himself returns to meet Zaela.

In the wake of Mor'ghor's death, Zaela is named leader of the Dragonmaw, and welcomed into the Horde by Garrosh.

Despite the Dragonmaw taking up arms with the Horde, Narkrall Rakeclaw within Bloodgulch is less than pleased with his new allies. Taking the "Demon Chain", an item used to project will upon sentient beings (in particular, black dragons) and his own subdued black drake, Torth, Narkrall leaves to annihilate the Wildhammer outpost of Thundermar in an attempt to gain support from the clan- against Zaela. Narkrall is left for dead in the process, having not anticipated the Alliance backing the Wildhammer, and the chain is returned to Zaela. Torth, however, survived the encounter, and fled the scene free from the chain's influence.

Now free from his enthrallment, Torth sets his sights on revenge against the Dragonmaw. Zaela is able to subdue him outside The Gullet, and attempts to put him under the chain's influence once more. Unwilling to serve, Zaela concludes that he must die.

Zaela later relocates to Crushblow, joined by a Horde liason named Lady Cozwynn sent by Lady Sylvanas Windrunner. She has gained the title of Warlord, and assists Garona Halforcen alongside Cozwynn during the showdown with Skullcrusher the Mountain.

Zaela and Garrosh developed a strong bond during the conflict.[4]

Zaela was summoned by Garrosh to help put down the burgeoning Darkspear Rebellion; she is found at the Dranosh'ar Blockade projecting her will onto an enslaved proto drake. SI:7 agents are sent to spy on her and overhear her converse with a nearby dark shaman; she expresses disdain for the trolls' rebellion, and maintains hope that Garrosh will move against them soon. She is surrounded by corpses of executed trolls.

Zaela oversees the defense of Durotar's shores during the Siege of Orgrimmar atop her fearsome drake, Galakras. She faces off against the naval forces led by Varian Wrynn and Lor'themar Theron. After Galakras is shot down from the sky, Zaela is launched from him. Upon hitting the ground, however, she throws down a smoke pellet and vanishes.

Zaela, having survived the Siege of Orgrimmar, flees to Grim Batol with what remains of the Dragonmaw clan. A message from a dragon sends her gathering up other loyalists to the True Horde, including Shokia and Thalen Songweaver. She also attacked Westguard Keep, freed Harrowmeiser and recruited pirates.

Zaela and the Dragonmaw ally with the Infinite dragonflight and attack the Temple of the White Tiger, causing a distraction long enough for Kairoz to free Garrosh and escape with him. After she was sure the two made it, she called for retreat.

At some point, she lost an eye. As Garrosh's only ally on Azeroth, Zaela is located in the Blasted Lands guarding the Dark Portal along with Commander Tharbek and his Ironmarch invasion force of the Iron Horde. There she owns a rylak. They later moved to Upper Blackrock Spire and claimed it as their main base of operations. The adventurers of the Horde and Alliance invaded the place and she commanded Tharbek to finish them off while she went to finish her "weapon".

Later, she is encountered as the final boss of revamped Upper Blackrock Spire. Tharbek and the proto-dragon with whom she had forged a close bond, Ragewing the Untamed, were killed. The adventurers killed her, stopping the plan of using a doomsday weapon that would trigger the volcano of the Mountain and thus the destruction of Stormwind City.

Zaela's personality would appear to be rather contradictory. In Cataclysm, Zaela appeared to be accepting of other races. Zaela admired Garrosh for leading a diverse group of people, worked closely with the Forsaken, Lady Cozwynn, and frequently stood up for the Horde player against the more extreme members of the Clan. Zaela was portrayed as rather cautious in this portrayal, not approving of foolhardy attacks on the Alliance, and wanting to focus on the Twilight's Hammer.[6]

Later on Zaela was portrayed as far more brash - undertaking risky military attacks - as well having a condescending attitude towards the other races of the Horde, believing the Horde should be comprised of only orcs. This is assumed to be due to Garrosh's influence. 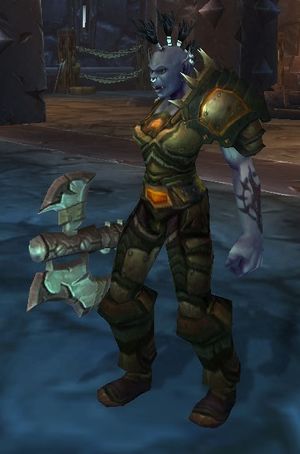 Zaela's appearance prior to Warlords of Draenor.

"This stronghold is fortified, but our enemies close in from all sides. We would be wise to secure our position on the coast before advancing farther inland."

"I am new to the burdens of leadership. I should've seen Narkrall's insubordination coming. Instead I am cleaning up his mess.

I don't know how Garrosh Hellscream does it. He must possess great strength to hold together a force as diverse as the Horde... I should like to know him more."

Zaela says: Impressive. Complete domination of the animal while it's weakened.
Zaela says: Tell me, what is this charm you're using?

She may have used the Demon Chain to control the proto-dragons during the Siege of Orgrimmar and in the Blackrock Spire.