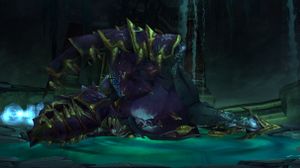 Zakajz's body lying within the tomb of Tyr.

Zakajz the Corruptor was a C'Thrax, a powerful servant of the Old God Yogg-Saron, who was killed by the Keeper Tyr millennia ago. It was buried beneath Tirisfal Glades with Tyr himself, sealed in a facility within Tyr's Fall under the Whispering Forest.

Long ago, Zakazj and Kith'ix served as the Black Empire's most ruthless and cunning C'Thraxxi generals. When the Old Gods fell to the might of the titan-forged armies, they were sealed away along many other n'raqi in underground chambers alongside the Old Gods. Millennia ago, the Prime Designate Loken, corrupted by Yogg-Saron, excavated their tombs and roused the two C'Thraxxi to life. Sensing the lingering touch of Yogg-Saron in the keeper's mind, the two readily obeyed, and were sent to hunt down Tyr, who had stolen the Discs of Norgannon from Loken. Eventually, Tyr sacrificed himself in an immense explosion. Kith'ix, though heavily wounded, survived and fled to the south, but the Corruptor was killed. The vrykul who had accompanied Tyr named the land "Tyr's Fall" in his honor, or "Tirisfal" in their tongue. The mortals who would one day inhabit the area of Tirisfal would feel two conflicting energies emanating from the earth: the remaining spiritual essence of Keeper Tyr, and that of Zakajz.[1]

After the Troll Wars, seeing the human kingdom of Arathor in good hands, the first king of Arathor Thoradin turned his attention to the origins of humanity. In the Tirisfal Glades, he discovered the tomb of Tyr[2] and recklessly broke the magical seals that kept the C'Thrax dead within the Tomb.[3] Zakajz began to slowly awaken and, even barely conscious, slew Thoradin's comrades easily. The king gave his life to ensure that the beast would not escape, and impaled Zakajz's brain with his sword

Centuries later, the Twilight's Hammer attempted to awaken Zakajz under Bishop Farthing's command. A warrior adventurer pulled Strom'kar from its carapace and struck the monster down once more in Thoradin's name.[3] Farthing attempted to use

[Xal'atath, Blade of the Black Empire] to rouse Zakajz yet again, but a priest adventurer used the dark blade to consume the last remnants of the creature's power.[4]

In addition, Flesh Spawn periodically form from the tears attacking all nearby players.

The Bloodstone Artifacts might be related to Zakajz, as Kegan Darkmar the Forsaken spoke of how remnants of the Old Gods still lingered in the deep hollows of the world.[5]