Hexmaster Zalazane was a powerful witch doctor of the Darkspear tribe and formerly best friend of Vol'jin, the Darkspear chieftain. Yet the powers he wielded, combined with a Loa-granted vision of his early years, eventually drove him to become the Darkspear's greatest traitor. When the Darkspear joined the Horde during the exodus to Kalimdor and claimed a new homeland on the Echo Isles, Zalazane eventually rose up and used his powers to take control of the islands for himself, and ruled over them for several years with an iron fist.

Several attempts were made by the Horde to kill the elusive witch doctor over the years until finally Vol'jin called upon all of the races of the Horde, and even the great spirits themselves, to liberate the Echo Isles on the eve of the Shattering. The Horde army defeated every obstacle the Hexmaster laid before them, cornered him on one of the smaller islands, and finally destroyed him, allowing the Darkspear to rebuild their homeland.

Zalazane grew up as the best friend of Vol'jin. Because Vol'jin was the son of the Darkspear chieftain Sen'jin, others always considered Vol'jin to be the hero while Zalazane was merely the companion. The youths often spoke of this and merely laughed at the ignorance of those who thought such.[7] Throughout their entire childhood, Zalazane and Vol'jin ran, fished, wrestled, and built mud forts together. Their first kill was the same beast. Zalazane knew things about Vol'jin that no one else did, having been present for everything from the time when Vol'jin cried over a dead pet to the day he beat an older bully senseless.[8] While Vol'jin trained to become a shadow hunter, Zalazane became a witch doctor under Master Gadrin. Sen'jin himself encouraged Zalazane, and some Darkspears thought that the young witch doctor was being trained to lead after Sen'jin while Vol'jin was destined for greater things. However, even this was incorrect, for Vol'jin and Zalazane both believed in Sen'jin's dream of a homeland for the Darkspears.[7]

While still a "young nobody", Vol'jin was sent into First Home. Unsure of himself, Vol'jin convinced Zalazane to sneak into First Home and be tested by the loa, thinking they would be stronger together than if alone. Zalazane not knowing the truth at the time, that Vol'jin was sent there by his father, was more than willing to help his friend. During these tests, both trolls were each granted separate visions of a possible future for their people. In Zalazane's vision, he saw himself leading Darkspear fighters away from the tribe. His reasoning being that the current leader was too weak, and believed he sold the Darkspear out. Zalazane saw himself become the new leader, and the tribe split in half. With those visions, the two trolls learned many things, like that they would end up fighting each other to death. Yet both trolls agreed that the visions were not set in stone and were just possibilities. Fate does not control their actions and whatever happens, it happens because they chose it to be. Zalazane seems to embrace his destiny and believes that if the troll in his vision does become weak, then in his perspective, the weak troll leader would be the villain in his story and would force him to usurp him.

Both the young trolls, having passed the tests and now able to see and commune with the loa were now what they sought to become. However, after leaving First Home, with each step they took memories of what they learned faded and only keeping just a vague sense of what was needed.

When they returned to their village, after thinking only a week had passed but was really three months, they found the village in ruins and many trolls dead. The ones that were able were building ships and preparing to leave. As Vol'jin's most trusted friend and knowing he would do a fine job, Zalazane was sent with the first voyage to prepare the way. Part of Vol'jin balked at the idea and he didn't know why, but he felt that he should keep Zalazane close to him now.[8] 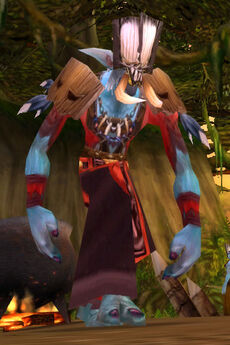 The face of Zalazane in WoW, seen by those who have "killed" him over the years.

Somewhere, at some point, Zalazane was overcome with doubt. As Vol'jin later reflected, it could have been the knowledge that Sen'jin—a powerful witch doctor—had died so easily, or perhaps hearing one too many times that Vol'jin was the hero while Zalazane was the companion, or perhaps something that Vol'jin couldn't even guess at. Whatever it was, it caused Zalazane to lunge for power that drove him mad.[7]

When the Darkspear trolls returned to the Echo Isles, after answering Rexxar's call to aid the Horde against Admiral Proudmoore, Zalazane had been driven mad by his own power and betrayed the tribe. He used dark voodoo to rob most of the Darkspear trolls of their free will, forcing them to obey him. As his influence spread, his army grew while the number of free Darkspears dwindled. Fearing that all of his people would fall to Zalazane's insidious sorcery, Vol'jin ordered the tribe to abandon the Echo Isles.

Thus, the free Darkspear trolls left the islands and created the fishing village of Sen'jin on the Durotar coast, just northwest of the Echo Isles.

The Darkspears and their allies frequently struck at Zalazane's holdings on the Echo Isles, determined to win back the trolls' first home on Kalimdor. But Zalazane had not given up on his efforts to enslave his entire tribe, and so he continued to send his trolls to the mainland in order to drag further Darkspears under his sway.[9] Zalazane disrupted the normal flow of magic in Durotar using ju-ju heaps he placed among his huts on the main Echo Isle.[4]

Though many trolls and other members of the Horde had journeyed to the Echo Isles to slay him, and a number had even returned with his head, a few days later the magic always wore off and his "head" was revealed to be nothing more than painted rocks, bunches of coconuts, or the head of an enslaved Darkspear troll.[10] 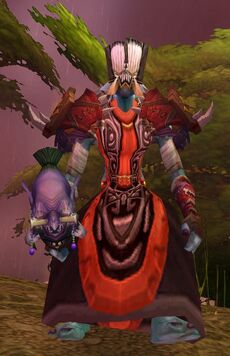 The true Zalazane, at the time of his downfall.

After years of biding his time and gathering allies, Vol'jin gathered a great army of the Horde and - aided by the elements and the beasts of Durotar - marched on the Echo Isles. The massed army fought through the legions of hexed trolls until they came face-to-face with Zalazane himself. Fleeing across the Isles and gathering his foul magics, Zalazane erected a shield around himself, while he used his magic to turn the Darkspear warriors against their chieftain. Cornered, Zalazane boasted that he was invincible and that no living thing could penetrate his shield...at which point he was greeted by the mocking laughter of the great Loa Bwonsamdi, guardian of the dead.

Damning the sorcerer for usurping his domain, Bwonsamdi brought down the Hexmaster's shield and then exploded him from within, bringing an end once and for all to Zalazane's evil reign of the Echo Isles.

Afterward, Vol'jin liked to think that in Zalazane's last moments, he had returned to sanity and was pleased to be free.[7]

Zalazane's spirit can be found chained up in Bwonsamdi's temple, the Necropolis, in Nazmir.

The Echo Isles came under attack once again by Zalazane, who broke free of Bwonsamdi and came back as a lich with an army of undead.[11] He was able to break away because Bwonsamdi did not also have Vol'jin's spirit.[12] Zalazane seems to be aware that Vol'jin had died, attacking the isles to claim his ashes.[13] Vol'jin's glaive was used to combat Zalazane because it was necessary to use a magical weapon to harm someone who escaped the grasp of Bwonsamdi, and the bond between Vol'jin and Zalazane was great.[14] Upon his death Zalazane proclaimed "What? Vol'jin... you could not have grown so strong without becoming... a..."[15]

Zalazane was a level 10 troll located in the Echo Isles in Durotar. During the Zalazane's Fall event, he was boosted to level 80 as part of the final quest. With the conclusion of the event following the release of patch 4.0.1, Zalazane and his minions have been removed entirely, in preparation for the Echo Isles becoming the troll starting zone in Cataclysm.

In Cataclysm, there is a region of the Echo Isles known as Zalazane's Fall. After being killed here by Bwonsamdi, the land became tainted.

This large troll is draped in black robes and wears a black-and-white, wooden mask reminiscent of both necromancy and voodoo. Wrinkled hands grip a dark quarterstaff with a humanoid skull on the top. Zalazane, in his mid-50s, decided that his people did not need the help of the Orcs in order to succeed. He was further offended when he heard about Thrall's distrust of arcane magic. With the help of a number of similar-minded trolls — and summoned zombies — Zalazane drove most of his fellow jungle trolls from the Echo Isles. He continues to attack the other trolls of the Darkspear tribe, and his reasoning is unknown. The source of his knowledge of necromantic magic is equally mysterious.

In combat, Zalazane begins the fight by summoning undead. He then uses death coil and other offensive spells until he exhausts his repertoire, then wades into melee or retreats.

Zalazane's experiments on the Echo Isles had progressed far further than the Horde ever anticipated, and the trolls created greater undead, such as abominations. The warchief called for a full assault on the Echo Isles before the situation escalated.[16]

[5] Report to Sen'jin Village, Master Gadrin states that the evil of the Burning Blade cult has taken seed on the Echo Isles, even though Zalazane and his minions were the only ones who inhabited the isles prior to Cataclysm. This may imply that Zalazane had ties to the Burning Blade, or alternatively be a developer mistake.