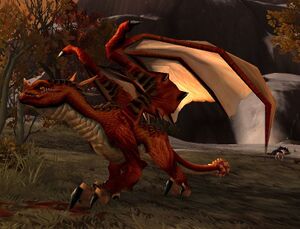 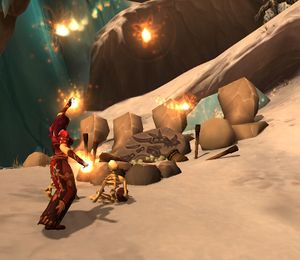 Zallestrasza is a red drake, and an agent of the former Aspect Alexstrasza dispatched to Drustvar. There, she was tasked with finding the final resting place of the ancient green dragon Vadekius and ensuring that his remains could not be raised into undeath.[1]

Enlisting the aid of the Thornspeakers and a passing adventurer, Zallestrasza journeyed to Vadekius's Rest and began a ritual to cleanse the remains. They were soon attacked by Danir Emberlight, who sought to raise Vadekius himself, though the death knight was slain. The ritual complete, Zallestrasza departed to continue her business elsewhere.

If the player is a death knight, she recognizes them as the Deathlord of the Ebon Blade and calls them out for attacking Ruby Sanctum and raising Kyranastrasz as their personal mount during the Third invasion of the Burning Legion, before reluctantly accepting their aid. After helping her, the Deathlord can either ask her if their actions have helped earn back some of the trust between them and the red dragonflight, or attempt to kill her. Depending on the choice, she either urges the Deathlord to not stray from their path or knocks them back and flies away unharmed.

Well met, <name>. Word of your heroic deeds as a champion of Azeroth are known to us.