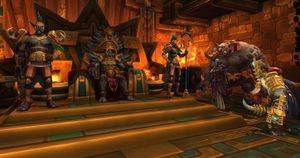 King Rastakhan and his Council.

The Zanchuli Council advises the rulers of the Zandalari Empire, and ensures their every command is executed upon.

Dictating every aspect of Zandalari society down to the very last detail are the Scholars and the Priesthood. Masters of magic and communing with the spirits, these respected bastions of knowledge stand upon fifteen millennia worth of accumulated knowledge. The highest of these have a seat on the Zanchuli Council, which both advises the King and ensures his every command is executed upon. The council is consulted before every battle or major decision. Empowered by the Zandalari gods themselves to act as his voice, King Rastakhan ruled for over two hundred years.[1]

One of the most respected of these was Zul. Even as a child his dark and terrible visions had come true down to the last horrifying detail. He commanded fear and respect as one of the dark prophets: seers capable of witnessing great tragedies before they come to pass. He advised the council and the king to unite with the other troll tribes and to abandon their doomed homeland. Despite Zul's infamy, the council refused to believe in the scope of the disaster to come. Many felt that Zul was grandstanding to increase his own status and power. They scoffed as he and his followers began assembling a war fleet and reaching out to the lesser troll races. But Zul's vision were visions of the truth. Deathwing's Cataclysm rocked Zandalar to its foundation. The spine of the land broke in two, and soon, the city and all its riches began to slide into the hungry sea. The Zandalari people turned to their King for help, but there was only one Zandalari equipped to help them: The prophet Zul.[2]

Long ago it was decided that the dire trolls should always have a seat on the Zanchuli Council, to ensure that those specials needs of the elite warriors were met by the government, and to provide the wisdom of war to those councilors who may seldom see a battlefront. General Jakra'zet, who had proven himself in Zul's campaign in Pandaria, was the first non-Zandalari troll to be on the council.[3]

All members but Wardruid Loti and Hexlord Raal betray Rastakhan and side with Zul, seeking to recreate the ancient troll empire with a revived Dazar at its head instead of Rastakhan. Vol'kaal and Yazma are killed at Atal'Dazar, General Jakra'zet dies in Vol'dun while resurrecting Mythrax the Unraveler,[4] and Zul himself is killed by Rastakhan during Mythrax's attack on Dazar'alor,[5] though he is resurrected by his new master, G'huun, and then killed again in the halls of Uldir.

After the Fourth War, the Zanchuli Council investigated families who were tied to the traitor Yazma. They found Bezime and his family cleared of any wrongdoing. They later advised Queen Talanji with dealing with the Widow's Bite.[6]