Zandalar (or Zandalar Isle)[1] is an island[2] located in the South Seas that serves as the homeland of the Zandalari race of trolls, having once acted as the cradle and birthplace of all troll civilization on Azeroth. Originally a chain of mountains on the continent of Ancient Kalimdor, it became an island following the Great Sundering caused by the War of the Ancients. The Zandalari Empire survived and kept seeking to influence troll and world affairs.

With the advent of the Cataclysm, the island was thrown into chaos, as large sections of its capital were lost to the sea[3][4] and the jungle of Nazmir began to sink, transforming it into a swamp.[5] This would lead the Zandalari followers of Zul to attempt to forge a new nation in other parts of the world to escape their home which they believed doomed, but they were largely unsuccessful.[6] Not as strong as in times past, beset by internal troubles within Zandalar itself, and amidst another war with the Alliance, the trolls of Zandalar now seek fresh allies, setting the ancient island up as a major theater for the Fourth War.

Originally, "Zandalar" was the name given to a holy mountain range in southern Kalimdor, where many Wild Gods (referred to by the trolls as "loa") dwelled. As the trolls revered and worshiped these loa, they soon built small encampments on the slopes of the Zandalar Mountains. Nearly all of the tallest plateaus were claimed by the most powerful group of trolls, the Zandalar tribe. Atop Zandalar's highest peaks, the Zandalari constructed a small cluster of crude shrines, that would later come to grow into a bustling temple city known as Zuldazar. This series of giant ziggurats looked like a towering mountain from a distance.[7] During the Aqir and Troll War, the Old Gods' forces would assault the Zandalar Mountains.[7]

When the first Well of Eternity imploded, a hole was punched through Kalimdor. Deep fissures appeared in the continent, and the Zandalari hastily cast strong protective spells to protect their home from destruction. Even so, they could not shield the rest of the continent from widespread upheaval. The ground immediately beyond the Zandalari's shield was drawn underwater when Kalimdor broke into separate landmasses. When at last the Sundering was over, the Zandalari saw that their home had become an island.[8]

At some point, a plague of corrupted blood broke out on Zandalar, after a foolish troll tried to summon Hakkar the Soulflayer on the island.[9][10] After the great plague, there were still those who clung to the magics of the blood god. They tested their magics and perfected them. One such relic was a Sanguinating Totem, capable of draining the life and blood from enemies and infusing the caster with it, altering them in unusual ways. This was the dawn of who the Zandalari call, "the blood trolls".[11]

King Rastakhan rules the island from a great, golden palace.[3] Different troll tribes distrust one another and have often fought one another, but every six years, envoys from all the troll tribes arrive in Zuldazar in order to share information and discuss matters that may affect the entire troll race.[8]

Zandalar has been severely crippled by the Cataclysm,[12] causing King Rastakhan's palace to list to one side,[3] the spine of the land to split in two,[13] a fissure to open in the floor of the forum,[3] and the region of the island called Nazmir[5] as well as other areas of the island to begin sinking beneath the waves.[4][14][15] But though Zandalar was indeed damaged, it did not sink as Zul predicted. While Zul and the Golden Fleet left Zandalar, those that stayed behind endured and rebuilt.[16] This also explains the desperate measures the Zandalari have taken, by issuing the call to scattered troll populations of Azeroth as well as their wish to reunite with the mogu and claim Pandaria as their own.

Recently, the Horde have come to Zandalar to seek alliances as a result of another war with the Alliance. The Zandalari have to deal with the blood trolls attacking them from the sinking region of Nazmir, as well as a civil war between Zul's followers and Rastakhan's followers. 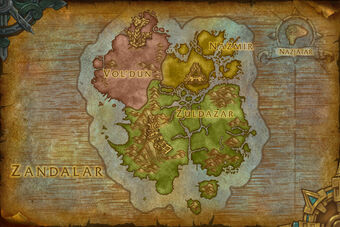 Zandalar is a large tropical island located in the South Seas, between the Maelstrom and Pandaria.[17]

Zandalar is separated into three regions. All zones are scaled to the player's level up to 50.

Zandalar is a sizeable island in the South Seas, to the southwest of Westfall on Azeroth. On this island live trolls — thousands upon thousands of trolls. It is understandably a difficult place to visit for anyone who isn't a troll. Two huge mountains rise from its green canopy; one of these mountains is, in fact, the great ziggurat-city Zuldazar, while the other is the snowy Mount Mugamba. Other, smaller ziggurats — the domains of troll priests and witch doctors — also jut from the jungle, and birds and stranger beasts fly it above and among the trees. Troll priests and witch doctors live all over the island. It is a lush and tropical place, and a deadly one.[18]

Trolls dominate Zandalar, including all known trolls, from jungle to ice, which consider Zandalar their homeland. It is neutral territory for their kind, so trolls don't battle each other when are on Zandalar. The same courtesy doesn't extend toward other races, though, and Zandalar's trolls are a wicked and voodoo-worshiping bunch who delight in slaying their enemies and devouring their remains. As such, not even goblin merchants are safe on this island, and visitors face stalking, axe - and spear-wielding danger from every green shadow.

Most of the native trolls here are jungle trolls, though ice trolls live atop Mount Mugamba's snowy peak. The trolls here are bigger, stronger and nastier than all other trolls (well almost—the Drakkari of Northrend are a bit bigger). King Rastakhan, an ancient and formidable witch doctor and keeper of troll lore, rules from Zuldazar. Trolls often have trouble working with each other, despite the conferences on Zandalar.[19]

Zandalar in Lands of Mystery.

Zandalar is a tropical and lush island. Mount Mugamba is by far the highest peak on the island, rising from its center. Troll ziggurats, the domains of troll shamans, priests and witch doctors, are scattered throughout the jungle, as are troll totems and huts.

Zandalar boasts impressive wildlife as well and is a prime hunting ground. Bright fish, hermit crabs, birds, and monkeys dwell in the waters or jungle. In addition, more interesting prey attracts the discerning hunter: tigers, hydras, lions and couatl. A few makrura inhabit the area as well. Warm weather and rain are constant (except on Mugamba, where the rain turns to snow).[19]