The Zandalari army[2] (or the armies of Zandalar)[3] is one of the principal military wings of the armed forces of the Zandalari Empire along with the forces in the Golden Fleet. The army has been an integral part of the survival of the empire throughout the many events following the Cataclysm.[citation needed]

Historically, the army has been based from Zuldazar, and has been deployed to a great many areas across Azeroth. Their forces served in the continents of the Eastern Kingdoms and Pandaria, as part of the war against the Zandalari. 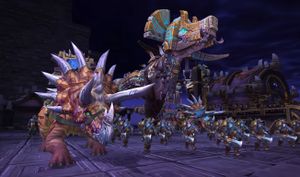 The army on the Isle of Thunder.

The Zandalari Empire is a group of mystical trolls who serve as the priest caste for all other trolls. They have few warriors, and what warriors they do have are dedicated to protecting their home island of Zandalar. Thus, when the Zandalari need people to accomplish tasks in the larger world, they work through agents of other races. Were an unfriendly member of such a race to enter Zandalar, however, he would find himself contending with the Zandalari’s warriors. Though few, they are rumored to be excellent fighters.[citation needed]

Please add any available information to this section.
Zul warned King Rastakhan of the Cataclysm event to come, but the king dismissed it, but let Zul take some forces and leave Zuldazar. As Azeroth recovers from the destruction of the Cataclysm, the world's divided troll populations faced a bleak future. These dark times have spurred the trolls of the Zandalar, the historically wise and scholarly tribe from which all trolls originated, to take drastic action. With the Zandalari's aid, the fallen capitals of the Gurubashi and Amani nations—Zul'Gurub and Zul'Aman rebuilt, but adventurers defeated the trolls at Zul'Gurub and Zul'Aman.

Please add any available information to this section.
During the Cataclysm, King Rastakan sent Zul with some forces away from Zuldazar after the defeat at Zul'Gurub and Zul'Aman of the Zandalari army who sided with Zul revived Lei Shen and aided him on the Isle of Thunder.

Presence in the Empire

The Zandalari army is highly active in the imperial lands. Serving a variety of functions, the army generally focuses on maintaining law and order and protecting the civilian populace.[citation needed]

Under the leadership of the General Jakra'zet, lord of the armies of Zandalar,[3] many troops are deployed across the massive capital city of the Zandalari Empire to defend the numerous settlements in the primal jungle. Following the Zandalari civil war, the Warguard Rakera was promoted to General of the army.

The Zandalari army is made up of numerous subgroups, including: