The Zandalari trolls are one of the playable Horde allied races in World of Warcraft, introduced in Battle for Azeroth. They are the progenitors of all trollkind, and as such rule an ancient, powerful empire upon the South Seas, after which they name themselves.

Talanji is their queen, and she rules from atop their capital, Dazar'alor. Whilst the Zandalari do ride raptors much like their Darkspear cousins, the preferred racial mount appears to be the Direhorn. As the original trolls, Zandalari speak the language of all their kind, Zandali, which is appropriately named after them. Orcish is also known as a secondary language. 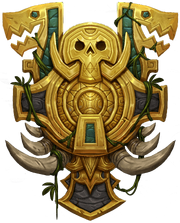 Descended from the first troll tribes, the Zandalari are an ancient kingdom steeped in ritual and superstition. Their warriors ride mighty dinosaurs into battle, and they possess one of the most formidable fleets in the known world. But as enemies encroach upon the borders of Zuldazar, unrest within the king's council threatens to topple the empire. If the heroes of the Horde can return stability to Zandalar, they would gain a powerful new ally.[1]

The Zandalari are a proud people whose origins date back to the early days of Azeroth's history. Their fierce warriors ride dinosaurs into battle, and they possess one of the most formidable naval fleets in the known world.

Queen Talanji: De Zandalari have ruled dis land for thousands of years. With de loa's blessing, our sacred blades and mighty ships commanded de seas. But over time, our empire grew stagnant. We stood alone. Threats from without and within rose up to challenge us.. to test our faith. Now, I am queen. And together with de Horde, we take our rightful place among de great kingdoms of Azeroth. Zandalar forever!

[Zandalar Forever!] and completed the Tides of Vengeance War Campaign. The recruitment quests became available in patch 8.1.5 on 12 March 2019.