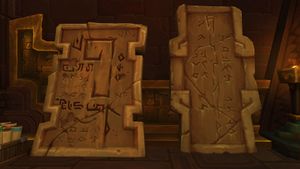 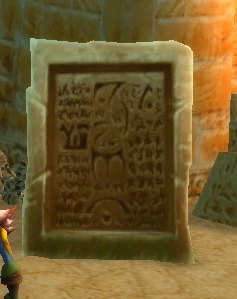 Zandali writing on the Tablet of Theka. 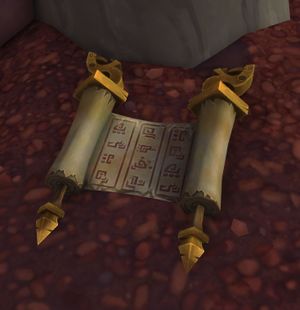 Zandali, also known as Troll[1][2] or Zandalari,[3][4] is the native language of the trolls. Trolls of all types speak Zandali. Like many languages, Zandali has many accents divided by regions. The Stranglethorn Vale accent is distinct enough that trolls can recognize it with only one word.[5] Zandali is taught to the young of the Darkspear tribe, with Orcish being taught in addition. Although described as a guttural language,[6] Zandali always has a melodious flow to it.[7]

The Hakkari refer to the language as "the old tongue" and do not converse in it.[8] In World of Warcraft, Zandali is the secondary language spoken by the Darkspear trolls of the Horde.

It appears to be named after Zandalar, where the early trolls first settled.

Here are a few common Zandali phrases and words, for which the translations have been officially confirmed by Blizzard:

These words are of English origin and it is not known whether or not they're regarded as Zandali or have an unknown Zandali equivalent:

Some trolls have descended so far into barbarism that they have forgotten Zandali, instead speaking Low Common.[27] The Troll language is largely syllabic.[28]

Jungle troll youth do not receive public names until they have earned a name in battle. Until then, they are referred to by generic diminutives.[33] Jungle troll names look simple but are surprisingly complex. Their language is largely syllabic, and various syllables can be added to the beginning or end of a troll's name to denote status and ability. Troll given names are usually one syllable, to facilitate the additions of these titles. Some trolls drop their given names altogether and are known purely by their titles.

Forest trolls follow the same naming conventions as jungle trolls, though some of the suffixes and prefixes differ.

This is the list of words created by the in-game language parser for the Troll language and is listed as language number fourteen (word range 1280-1358) in the Language text file.

Note: The language algorithm used by the in-game "translator" merely makes the words look like Zandali. It does not actually use a specific dictionary. Therefore, translated in-game speech isn't true Zandali.