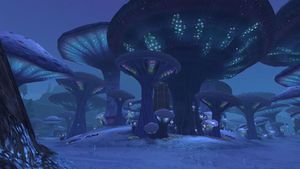 The Umbrafen in Shadowmoon Valley. 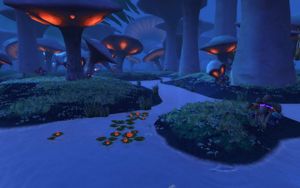 The Zangarmarsh in current-day Outland.

The coast of the Zangar Sea.

One strain of fungus in particular is especially prevalent in Draenor's fungal ecosystem, causing Dr. Hadley Ricard to name it Zangarium Draenormycota. It is highly adaptable, can be found on many of the living organisms throughout Zangar Shore,[5] and is believed to be unique to Draenor.[6] Dr. Ricard also believes that gaining an understanding of the fungal strains in relation to the local ecology will teach a great deal about the various species on Draenor.

Similar to the plant-based Primals, the Zangar encroachment has the ability to infest land-dweling creatures with spores, turning them into mindless fungal slaves, as can be seen in the Crimson Fen. In southern Spires of Arak, the land is being overtaken by the mushrooms that grow underwater, and as a result, strange fungal creatures are sprouting up in the area.[7] Pinchwhistle Point was overwhelmed by the fungus and most of its inhabitants were infested; however, Krixel Pinchwhistle managed to find a cure.[8]

After Draenor shattered into Outland, the Zangar encroachment eventually bloomed into the Zangarmarsh.[1] 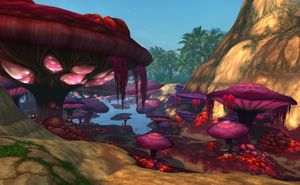 Even though the encroachments appear to employ the same manner of infecting victims with spores as the Primals (as can be seen in the Crimson Fen and Pinchwhistle Point), the two groups do not appear to be allied with one another, since podlings can be seen fighting fungal giants on the northern coast of Shadowmoon Valley; in fact, rumor has it that podlings are extremely allergic to the spores of fungal giants.[16] However, there is reason to believe that the podlings were eventually transformed into Outland's sporelings, likely due to fungal infection.

Since most Primals appear to have vanished from Draenor after its destruction, with the exception of a few ancients and treants, but plenty of fungal creatures remain in the Zangarmarsh, it is probably safe to assume that the fungi were victorious in the end.

The Zangar fungi spawned from a Sporemound, one of the rulers of the prehistoric Evergrowth that the Primals also sprang from. Why the fungi seemed to turn on their former allies is unclear, but it was possibly due to the collapse of the Evergrowth's hivemind.