From Wowpedia
(Redirected from Zanza)
Jump to: navigation, search

— Inscription on the Altar of Zanza

Zanza the Restless is a Zandalari loa. He was originally found near the entrance to the Cache of Madness in Zul'Gurub. Before patch 4.0.3a, he was standing at Zanza's Rise and gave the quests to obtain the Zul'Gurub class enchants and the +10 nature resistance enchant

[Savage Guard]. Now, he gives information about the Cache of Madness. 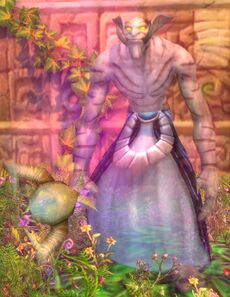 Long ago, when the high elves went to war with the trolls of the Amani Empire, the elves could not understand how the trolls' weapon enchantments were more powerful than their own. The elves then stole ancient knowledge from troll spellcasters, including the famous Zanza, and used their idols to craft their own versions of the troll enchantments,[1] and enchant their weapons and armor during their conquest of the trolls. The elves called these bastardized enchantments "Arcanum".

In recent times, Zanza participated in the war against Hakkar the Soulflayer in Stranglethorn Vale.

Zanza later appears in Zuldazar on Zandalar during Talanji's ascension to queen of the Zandalari.[2] 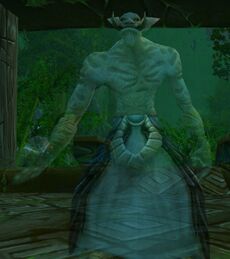 At Neutral reputation
I am Zanza, a Loa of Zandalar. I have come in this ethereal form from Zandalar to help my people. Hakkar has no dominion over my soul.
I help those that have helped the Zandalarian people.

At Exalted reputation
A friend of the Zandalarian! You have ventured deep into the layer of the Blood God, <class>. You will do well to listen to what I have to say.
Many thousands of years ago, while the indigenous trolls of the Zul'Aman empire were battling the invading high elf heathens, great magic was stolen from Zanza. This magic was used by the high elves to enchant their weapons and armor to assist in conquering the trolls of the region.

I think I have heard of this magic.
Have you? Then you know how weak and pathetic the high elf version of troll magic was?
The high elves could not understand why a people with their magical affinity could not contend with the powers of troll voodoo. This was an inconceivable notion for the pale skins to understand. They were resigned to using the bastardized version of troll enchantments. I believe they called them 'Arcanum.'

Arcanum? That sounds very familiar.
Zanza can create the ancient troll enchantments with the right components. This magic will help you in defeating Hakkar and his minions.
I only ask that you bring me two items.

What are the components?
The first is a primal token that must be taken from the most powerful of the Hakkari lieutenants: Jin'do and the Bloodlord.
The second is a punctured voodoo doll. These can be found in the piles of refuse that litter this foul place. Look inside the jinxed hoodoo piles.
Bring me these things and I will create a powerful enchantment for you!

Mebbe if ye' know a ting or two about ancient artifacts, ye can fin' a way to put dem to rest.