For strategy on the Zul'Gurub encounters, see Zanzil (tactics). 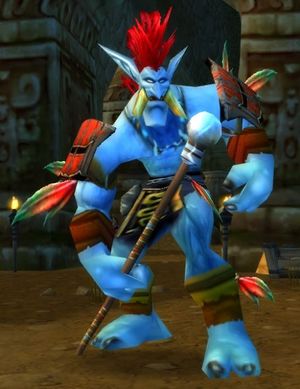 In Stranglethorn Vale, he is a level 46 troll found in the Ruins of Aboraz, serving as a minor villain during the Cape of Stranglethorn storyline, and a major antagonist during the Rise of the Zandalari quest chain. He is also a 5 man boss in the newer Zul'Gurub.

Years ago, the Gurubashi exiled one of their own from Zul'Gurub: a troll by the name of Zanzil. The reasons why aren't all that clear, but it had most likely something to do with Zanzils tendency to administer powerful, behavior-altering drugs to anyone he saw. His mixtures causes those who drink it to become strong but feeble minded - similar to zombies.[3] Apparently, he is the one troll too insane for the likes of the Gurubashi.[citation needed]

Zanzil's liberal use of Zanzil's Mixture has drugged just about everything in the Ruins of Aboraz into obeying him, including naga, Chucky "Ten Thumbs" and Yenniku. Yenniku was captured by Zanzil, who took control of his body and mind, and then sent to the Skullsplitter Tribe to make them join him. Using a Soul Gem, players were able to retrieve his soul.

Zanzil attempted to unite the troll tribes of Stranglethorn Vale into an army under his rule, starting with the Skullsplitter tribe.[4][5]

Years after the Gurubashi priests and their blood god have been slain, Zanzil the Outcast is enlisted by the shade of Jin'do to help him restore Zul'Gurub to its former glory by resurrecting both High Priestess Jeklik and High Priest Venoxis using his special elixirs. Though the player managed to thwart the resurrection of Jeklik, High Priest Venoxis was successfully brought back to life.

After the Zandalari pledge to aid Gurubashi reach their former greatness, the Gurubashi begin attacking Stranglethorn and Zanzil personally ventures to The Cape of Stranglethorn and turns the inhabitants of both Hardwrench Hideaway and the Explorers' League Digsite into voodoo zombies by poisoning the food in each town.

He was killed in Gurubashi capital of Zul'Gurub, failing in his attempts to redeem himself to the empire.[6]

At the alter of Jeklik during the quest

At the alter of Venoxis during the quest

Despite a quest, Jin'do, and Zanzil himself mentioning and implying that he was a exiled from the Gurubashi, his Dungeon Journal page and Zanzil the Outcast and His Followers list him as being exiled from the Skullsplitter tribe.