Zen'shar is a legacy encounter in the Brawler's Guild and requires the use of a challenge card to fight. 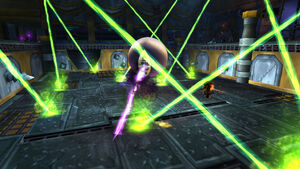 This is a two-phase encounter, and it starts with Zen'shar not targetable and immune to all damage. Dodge the void zones and laser beams. Ten Eyes of Warding surround it and must be destroyed. Once the eyes are dead, Zen'shar begins the fight. Try to stay behind it whenever it casts Evil Glare.

Zen'shar and the ten eyes will require ~90K DPS to beat the enrage timer.

Bizmo yells: And in the other corner, we have... a big cloud of scary floating eyes? This doesn't look good.

Boss Bazzelflange yells: And in the other corner, we have the many eyes of Zen'shar! What's next, a fighting nose?