Zen'tabra (also spelled Zen'Tabra)[1] is a level 11 troll druid trainer on Darkspear Isle. Zen'tabra later appears during the Firelands Invasion patrolling The Regrowth in Mount Hyjal alongside Celestine of the Harvest, Mardant Strongoak and Gart Mistrunner. 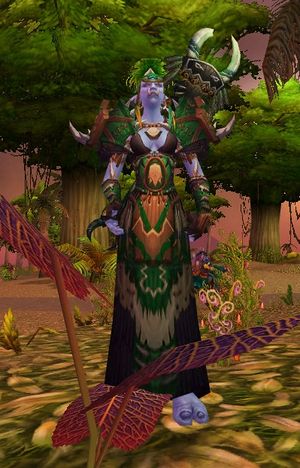 Zen'tabra was among the group of witch doctors who assumed that the spirits were angry with them when they began hearing their call less and less. Unfortunately by the time the witch doctors realized that Zalazane had been slowly cutting off from the loa, they were powerless to stop. In shame Zen'tabra and the other witch doctors ignored Vol'jin's call to retreat and fled into the southern end of the Echo Isles. That night Zen'tabra had a vision in which she was approached by the ancient raptor loa Gonk and transported to the Emerald Dream. After being informed that Zalazane's mindless slaves were killing the beasts on the isles and hearing Gonk's request to save them, Zen'tabra and the other witch doctors began studying druidism.

After successfully becoming druids, as learning in the Emerald Dream hurries the process along, Zen'tabra and her fellow druids tried to stay unnoticed by Zalazane, whose mind servants were able to kill a few of them. Despite these losses, they remained focused on keeping the isles alive until Vol'jin and the Darkspear returned to reclaim their former home.

After Vanira's frog spies discovered Zen'tabra she was fought in her tiger form and then recruited to join the attack on Zalazane by Horde adventurers.[2] As Vol'jin began the battle, Zen'tabra brought the beasts of the isles to help the Horde forces. After aiding the Darkspear in proving their worth to Bwonsamdi, she aids in killing Jun'do the Traitor and heeds Vol'jin's warning that Zalazane is cunning and strong with the voodoo. After a fierce battle with Zalazane he flees. Zen'tabra changes into a bat to find him. After discovering it she informs Vol'jin and warns him that Zalazane was working some black magic.

Vol'jin, perhaps in an act of mercy for his former friend, offers Zalazane the chance to surrender, only for Zalazane to reveal that he has lured Vol'jin's strike force into a trap. Zalazane quickly gains control of the Darkspear warriors and forces them to fight Vol'jin and the rest of the Horde strike force. After seeing his trap fail Zalazane says that it doesn't matter as no living thing can make its way through his barrier and as such the Echo Isles will be his to rule forever. Zen'tabra then witnesses Bwonsamdi's appearance. Bwonsamdi tells Zalazane that the dead Darkspear are his domain, and then kills Zalazane. After Vol'jin mentions that it was a fitting end to one so foul Zen'tabra declares that her fate is now entwined with Vol'jin's.

Afterwards, Zen'tabra was the messenger or among the messengers who successfully convinced the Cenarion Circle to accept the Darkspear tribe into their ranks. The only detail of this known is that Zen'tabra found the look on a Night Elven member's face amusing.

Zen'tabra's power is greatly diminished from her initial appearance, having decreased in level from 85 to 11. She now helps train new druid recruits on the Darkspear isle.

This level down appears to have been reversed, as she has been seen in Hyjal during the beginning of the Assault on the Firelands at the Sanctuary of Malorne flying around in the form of a bat.

Zen'tabra has been taken as a prisoner of war and is held captive at the Dranosh'ar Blockade. She was later freed by agents of the SI:7. She is later relocated at the now troll taken Razor Hill, where she introduces the Alliance representative to Vol'jin.

The Cenarion Circle planned to move the bulk of its forces to the Dreamgrove in Val'sharah the ancient forest where Cenarius taught Malfurion Stormrage, in order to combat the return of the Burning Legion. Hamuul Runetotem, Malfurion, Naralex, Zen'tabra, Remulos, and a druid hero opened a portal to the Emerald Dream at the Stormrage Barrow Dens, allowing their forces to move swiftly over vast distances.

She was later seen trapped in the Nightmare alongside Bashana Runetotem.[3]

Zen'tabra was later part of a small party led by Hamuul that also consisted of Skylord Omnuron and Celestine of the Harvest. They traveled to Mount Hyjal to investigate reports of a demonic presence in the area. Overwhelmed, they were soundly defeated and the Well of Eternity was almost completely destroyed. The arrival of the druid hero and Lyessa Bloomwatcher, who had come to cleanse

[G'Hanir, the Mother Tree], was their salvation, and the three druids were healed just in time to battle Destromath. Destromath was defeated when the newly cleansed G'Hanir was used to summon many wisps to defeat him, and afterwards Zen'tabra stayed behind to ensure that Omnuron and his forces could reestablish themselves on the mountain.[4]

Zen'tabra participated in the Battle for the Exodar battling against High General Rakeesh, alongside Naralex.

Zen'tabra once more defended the Echo Isles from Zalazane and his undead forces when he returned as a lich.[5]

Nature will guide ya when all else fails.

Zen'tabra, are you one of the druids from the rumors? Were there druids on the Echo Isles long ago?

<Zen'tabra laughs.>
We spread dose rumors, mon. Keep'n Zalazane and others off our tails. Don't be believin' everytin ya hear.
No, we be new ta de craft, only learnin' a few years ago. But in some ways, we spend our lives preparin' ta answer de call...

What were you before you were druids, then?

Some o' us be loa priests, witch doctors before. Like Zalazane...
<Zen'tabra's face grows hard as her gaze drifts south.>
We thought de spirits be angry wit us; we did not suspect it be Zalazane slowly cuttin' us off from dem. We knew he be strong, but not dat strong... and by de time his voodoo had reached de other isles, we was powerless ta stop 'im.

How did you escape Zalazane?

<Zen'tabra closes her eyes and shakes her head.>
When Vol'jin called for everyone ta flee, we... couldn't face de tribe after failing dem so badly. So, we fled south, ta de untamed jungle islands.
De wilds claimed a few o' us dat first night. We found safety in a deep cave in de center o' de isle, but me dreams dere were not peaceful: I be havin' a vision!

What was the vision?

<Zen'tabra's head snaps back to you, her eyes bright and her smile wide around her tusks.>
'Twas a jungle bigger and wilder dan I ever seen! And before me, de ancient raptor loa only talked about in Zandalari tales-Gonk, de Great Hunter!
De raptor spirit spoke ta me, told me he had brought me spirit to a place called de Emerald Dreem. De spirit had been trapped, like de other loa on de Echo Isles, by Zalazane's magic. But Gonk, bein' an ancient spirit, was able ta reach across and bring me spirit ta him, even through Zalazane's voodoo.

What did the spirit want?

Zalazane's mindless servants were killin' all de beasts o' de isles, burnin' up de trees and plants too. Gonk needed us ta save de life on de isles. But since we not be able ta draw upon de power o' de loa wit Zalazane in power, Gonk be showin' us a new way ta connect wit ALL de spirits o' nature, ta work WIT de spirits, not just be servin' a single loa at a time.
It be difficult at first, ya, mon, but Gonk be showin' us how ta also reach inta de Emerald Dream wit de spirits and learn from dem directly!

How did the other loa react to this?

<Zen'tabra laughs.>
De other loa, 'specially Shirvallah, did not much care for dis plan. Dey still be wantin' us ta work just for one o' dem at a time, not wit all de spirits at once. But Gonk had forced dere hands, and de knew it was de only way ta save de isles while Zalazane still rules.
I be tinkin' dat Gonk did not care for de other loa much either. He be teasin' de other loa all de time while we be learnin' from dem.

So what happened then?

We been workin' wit de spirits for many moons now, mon, but many o' us already knew de forms o' de loa we served before. It not be easy, but de Emerald Dream be a powerful teacher by itself-havin' de spirits demselves also teachin' ya... it hurries tings along.
Dat don't mean 'twas easy keepin' safe from Zalazane. Even wit our new tricks combined wit de loa givin' what help dey could, we lost a few bruddas and sistas over de years ta his voodoo and mindless servants. But we kept de life o' de isles alive, and when Vo'jin and de Darkspears returned, we knew just how ta take Zalazane down.

So are the loa still holding to their side of the deal?

Ya, mon, for now. Dey not be too keen on teachin' many more o' our kind, but dey be helpin' us 'long as we be keepin' de life o' de isles flourishin'. When Gonk left after de fall o' Zalazane, he be tellin' us how ta contact him if de other loa don't keep dey end o' de bargain.
I be hopin' it never come ta dat... but just in case, we be openin' up channels wit dat Cenarion Circle group.
<Zen'tabra cackles madly.>
Oh, ya shoulda seen de look on dat night elf's face....

The loa be powerful here. I can feel the presence of me own loa, Gonk, stalking behind every tree and bush. Gonk be near. It will be a fine thing to see him in person.