Zenbaro is a Zandalari troll sitting in front of a campfire on a terrace in southeastern Zul'Ahjin in Vol'dun. He offers to tell his tragic life story to the player if they repeatedly bring him water from the nearby Eternal Spring.

When first approached, Zenbaro has the following gossip text:

I never imagined dis would be my fate. Alone and dying in de dunes.

How did you end up here?
Isn't that de question we all end up asking ourselves?
<Zenbaro coughs.>
De sands have not been good to me, <name>. I am nearing my end.
My throat swells from de desert heat.
Fetch me some cool water from de spring nearby, and I will tell you my story.

[Zenbaro's Empty Canteen] is automatically added to the player's inventory. If they attempt to talk to Zenbaro again, he will simply say:

In order to continue, the player must head to the Eternal Spring to the south and use the canteen while standing in one of the pools of water to turn it into

[Zenbaro's Canteen]. If they return to Zenbaro with the filled canteen, he now has new dialogue:

He can now be talked to again for more dialogue:

Let me start from de beginning.
My earliest memories are some of my best, running with de scamps of Zuldazar.
Got up to nothing but trouble back then, but we didn't know any better.
Rajin was our leader. He gave us shelter, and in return, we did whatever he asked.
Dat usually meant running scams in de city or stealing from de loa temple's coffers.

Tell me more.
De boss took notice of my skills early on.
Before long, I was running personal errands for Rajin himself.
If someone needed a talking to, I was the guy to do it.
But trust me, there wasn't much talking involved.
<Zenbaro coughs.>
I could use more water, <name>.

The player receives Zenbaro's Empty Canteen back in their inventory. After filling it at the spring and returning once more, the conversation continues:

I was beginning to worry you might not be back.

<Give Zenbaro the canteen.>
Zenbaro says: Much better. Let me continue...

When talked to again:

I had earned Rajin's trust and respect, as much as anyone could.
For a scamp, that's de dream, but I had other things on my mind...
Rajin had a daughter, Kaiani. She was everything he was not: honest, kind... beautiful.

Tell me more.
During my time working for her father, we became close.
She begged me to leave de scamps and leave de city, but I knew dere was no escape.
I had no coin. Everything I stole went straight to Rajin. But did it have to?
From that day on, for every two coins I stole, I hid one away for myself.
<Zenabo[sic] coughs violently.>
I need water, <name>. Please...

After repeating the same process again:

I've been looking forward to your return, <name>.

<Give Zenbaro the canteen.>
Zenbaro says: You are too kind for dis world, <name>. Now where was I? Ah, yes. Our doomed escape.

When talked to again:

In a year's time, I had enough for me and Kaiani to run away.
We made our plan to leave dat night. I told her to meet me near de old merchant road at twilight.
As soon as de sun set behind de mountains, I ran toward my future.
When I reached de merchant road, armed guards were waiting.
De[sic] took me away without saying a word.

Tell me more.
It wasn't until many days later that I realized de horrible truth...
Kaiani was dead, killed by her father, but I was to take de blame.
<Zenbaro coughs violently.>
I don't think I have much longer.
Would you fetch dis dying man one last drink from de spring? 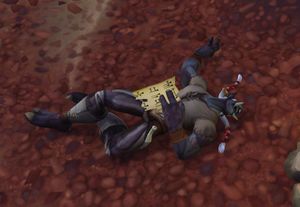 The expired Zenbaro, with the Hastily Scrawled Note in his hand.

Upon returning to Zenbaro's camp after filling the canteen at the spring one final time, the player finds the troll lying dead in front of his campfire and holding a Hastily Scrawled Note in his hand. In the note, Zenbaro thanks the player for reminding him that there is still good in the world, and informs them that Zenbaro's Lockbox in Zuldazar's Village in the Vines now belongs to the player. Zenbaro's Canteen remains in the player's inventory.