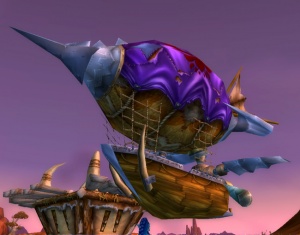 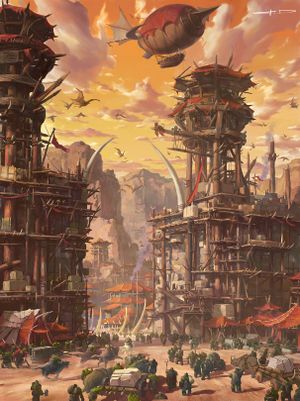 Zeppelins are flying contraptions created by the goblins, using a lighter-than-air design, with their machines employing bags filled with gas to make them buoyant in the air, compared to heavier-than-air designs, which employ wing surfaces and movement to produce lift, either using a fixed wing, or a spinning rotor.

A goblin zeppelin consists of a gondola of varying size suspended beneath one or more bags of lightweight gas that serve to keep the craft aloft. In keeping with the goblin fixation upon profit, these large crafts tend to be packed with cargo or paying passengers.

Zeppelins were ingenious inventions that allowed small teams of goblins to soar above the countryside and spy on enemy positions. The zeppelins were cumbersome, awkward and maintained no armament. Their airborne capabilities, extensive line of sight, and ability to spot underwater units, however, made them an integral part of the Horde's spy network.[1]

These goblins were members of the Steamwheedle Cartel.[2] During the Second War zeppelins crews were only a single pilot, but sometimes they also consisted of a pilot and an engine tender.[3]

After the defeat of the Horde during the Second War, the goblins realized their mistake and left the Horde. They are now a neutral force, making money off every side. Zeppelins could be hired at special laboratories found all over Azeroth.

In the late days of the Third War, the Scourge started employing special Sky Barges to transport its troops.

In the times following the defeat of the Burning Legion at Mount Hyjal, goblin zeppelins are employed once again by the Horde for the passage of the Great Sea between the continents. Although some of the goblins remain a neutral force, the Horde alone has the privilege of using zeppelins. Modern zeppelins have eight member crews including a sky-captain, a chief officer, a navigator, three crewmen, and two Horde guards. The goblins also worked on creating the Horde gunships, employing a similar technology as the zeppelins.

Lorewise, neutral goblin zeppelins do exist and they allow the transport of soldiers, but heavy weaponry, such as cannons, are forbidden to maintain neutrality.[4] Playful adventurers can also buy Darkmoon Zeppelins and Paper Zeppelins. 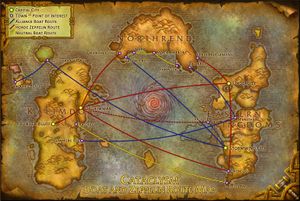 In World of Warcraft, you won't see free-flying zeppelins without a specific course. They now follow established routes with a zeppelin tower at each end point. Some cargo zeppelins can be seen crashed in places. 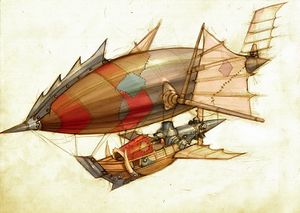 A goblin zeppelin is a form of transportation that consists of a wooden gondola attached to a large balloon, into which hot air is pumped by a phlogiston boiler. They are swift, able to make long journeys, and pass above rough terrain.[5]

The pilot of the zeppelin can control the direction through the use of ropes which are connected to both the steering wheel in the gondola, as well as fins on the balloon's back. Altitude is maintained or adjusted by the degree of inflation of the balloon, as well as with ballast. Moving in a direction or changing speed requires thrust, given by one or more rotors.[5]

The zeppelin is an example of one of the most stable technological devices to be found on Azeroth (a trait uncommon of goblin inventions), and malfunctions tend to be non-threatening. Naturally, it is possible for the zeppelin to drift off course or develop a leak, but only rarely will the phlogiston boiler have difficulty, and even rarer still will it explode.[5]

Since the Second War, zeppelins have become a widespread method of transportation, due to development by the goblins.[6] After the Second War, the goblins rescinded their alliance with the Horde and began selling their goods and services to the highest bidder. Throughout the course of the Third War, the zeppelins were employed by both the Horde and Alliance. Their speed had increased substantially and the zeppelins were now able to travel over long distances and rough terrain, as well as carry vast numbers of troops.[6]

Wildhammer dwarves do not like goblins, for they see them as materialistic and technology-driven. Wildhammers take pride in zeppelin hunting.[8] 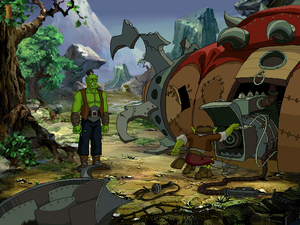 In the canceled Warcraft Adventures, a zeppelin built and piloted by Gazlowe helped Thrall travel around the Eastern Kingdoms. The zeppelin had several components, including a samophlange, and flew during over ten missions during the Second War.