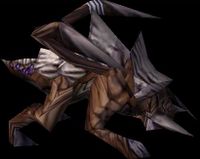 The Zergling from Warcraft III. 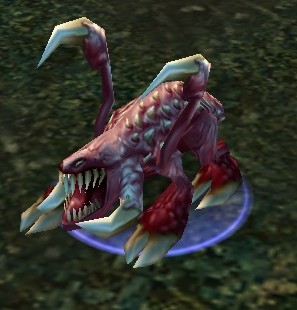 A Zergling pet in WoW.

A Zergling has four legs, sharp teeth, and two scythed arms that fold under their front legs while running but can rear up when attacking.

They are found in the Warcraft III World Editor, and appear in the bonus credits of Warcraft III: The Frozen Throne.

It found its way into World of Warcraft as a Collector's Edition vanity pet, summoned with

It will attack Grunty the Murloc Marine if it spawns nearby.

In WoW, the popular "Zerg Rush" strategy (often known simply as "Zerging") is adapted to mean attacking a player or mob with a far bigger group. Often seen in Arathi Basin.

"Only 1 at stables, let's kill him then zerg LM right after." 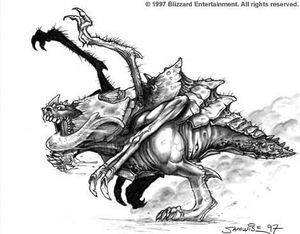 The Zergling from Starcraft.

This is an homage to StarCraft. See also: Zergling.