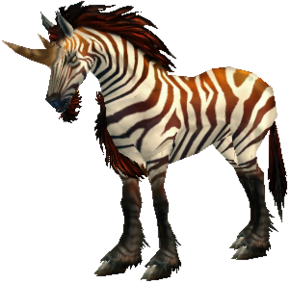 Zhevra, also called monohorns,[1] are striped, unicorn-like, zebra-hybrid horse beasts that are found in the Barrens. They are normally neutral and may not be the strongest of beasts in the Barrens, but stay clear of their kick or you'll regret it. Zhevras hold a lot of strength in their legs and can even knock a tauren on its haunches.[2] Zhevras are rarely used as mounts in Azeroth due to their stubborn nature and tendency to bite.[3] The Nightborne classify zhevra as unicorns; or rather, as "monohorns", which they claim is a much more fitting name.[4] 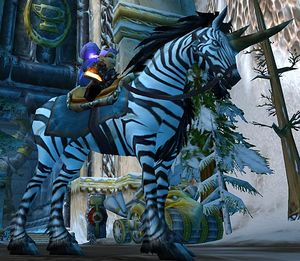 [Swift Zhevra]. This mount was only available as a reward bonus of the Recruit-A-Friend system, once the recruit had bought World of Warcraft and 60 days of playtime. This reward bonus has since been surpassed by the