Zhi the Harmonious was the leader of the Golden Lotus, the mysterious society of Pandaren in charge of protecting the Vale of Eternal Blossoms and its magical pools.

A Witness to History 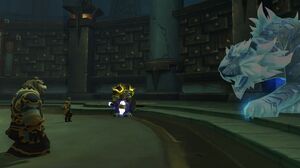 With the mists parted and the first emperor of the mogu, Lei Shen, resurrected by the Zandalari trolls, the beautiful and peaceful vale was threatened. Zhi had witnessed the legions of mogu storming the vale in force. As he knew his people were not trained for mass combat, he traveled to the Temple of the White Tiger to issue a petition to Xuen the White Tiger to open the gate of the vale and enlist the aid of the Horde and the Alliance. Though Taran Zhu as the leader of the Shado-pan was strongly against the idea, with the help of Prince Anduin Wrynn, Sunwalker Dezco and brave adventurers, Xuen was persuaded to open the gate.

Zhi and the other Golden Lotus caretakers gathered the refugees and several members of the Horde and the Alliance at the Gate of the August Celestials in time for the entrance to the vale to finally be opened. Zhi let the refugees set their camp in Mistfall Village and organized the Golden Lotus' campaign against the mogu from the Golden Pagoda.

Zhi and a handful of Golden Lotus members, including Mokimo the Strong and Weng the Merciful, visited the Shrine of Two Moons to seek a new guardian among the children there. They performed a "simple test" involving the use of a special gong to find the child. After Zhi rang the gong, the avatar of Chi-Ji the Red Crane appeared and located Dezco's twin sons. Chi-Ji said that he had not foreseen twins, and that only one child would need to serve the vale. Zhi was shocked to find the new member to be a child of the outsiders.

Though Zhi gave Dezco time to decide which son would join the order, the sunwalker decided instead to leave the vale with both of his sons, to prevent them from being taken away from him. Learning of this, Zhi sent Mokimo, Weng and Rook to inform Dezco that the Golden Lotus would respect the sunwalker's decision, and protect him and his sons until they were safely out of the vale. Dezco however suspected this was Zhi's oblique way of asking him to stay in the vale with his children. That night, the group was ambushed by mogu, and Dezco paid the price for his decision: the death of his son, Cloudhoof. However, amazed by the order's love and concern for his children, and stirred by Mokimo's speech of home, Dezco realized at last the true meaning of his wife's visions concerning the vale, and gave his remaining son Redhorn to Mokimo, saying goodbye to his only child and his last connection to his wife, in the knowledge that this was in fact the true reason for his tribe's journey to the vale. Mokimo told Dezco that Redhorn would be officially accepted into the order with a ceremony where Zhi would present him before Chi-Ji for anointment.[1] 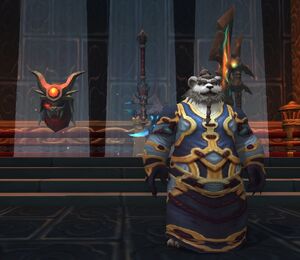 Zhi guards the artifacts with his life. 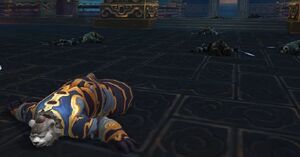 However, Zhi was wrong. Though he guarded the artifacts with his life, he could not stop the mogu from penetrating the Golden Lotus's defenses and taking them to the Thunder King. He and several Golden Lotus guardians were brutally killed.[2]

Zhi is still present and participates in the quest

[87] A Celestial Experience after Patch 5.4.0, even though his quest lines from before then establish that he was killed before then. He, and several of the Golden Lotus quest givers that died later on when the Vale was damaged by Garrosh Hellscream, are also present for