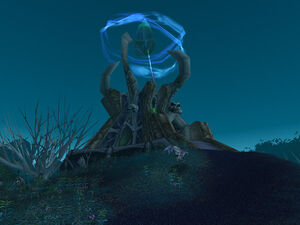 A ziggurat is a Scourge (and Forsaken) structure, currently found in Stratholme, the Eastern Plaguelands and the Ghostlands.

In Stratholme, three ziggurats at the Gauntlet must be emptied before confronting Baron Rivendare. Each is guarded by a mini-boss:

Searching these ziggurats for

[Scourge Data] is the objective for

In the Eastern Plaguelands, there are multiple ziggurats in the Plaguewood. Each is defended by a level 58 Ziggurat Protector. Destroying these ziggurats is the objective of the quest

The Ghostlands of Quel'Thalas contain two named ziggurats: the Bleeding Ziggurat and the Howling Ziggurat, on either side of the Dead Scar. In addition, Deatholme contains minor ziggurats where Masophet the Black, one of Dar'Khan Drathir's lieutenants, can often be found. Dr. Whitherlimb, a Scourge scientist, can also be found at either the Bleeding or Howling Ziggurats or the ziggurats in Deatholme.