“Zin-Azshari. Once the glorious epitome of the night elf civilization. A sprawling city at the edge of the basis of the night elves' power, the Well. The home of the revered Queen, Azshara, for whom her adoring subjects had renamed the capital.
Zin-Azshari... a ruined graveyard, the launching point of the Burning Legion.”

Zin-Azshari ("the Glory of Azshara" in Darnassian) is located in eastern Nazjatar, it used to be the capital city of the night elven Kaldorei Empire and was located on the shores of the Well of Eternity in Ancient Kalimdor, it was destroyed during the War of the Ancients 10,000 years ago when the Well of Eternity collapsed and sunk the vast majority of Ancient Kalimdor with it, in an event known as the Great Sundering.

Originally named Elun'dris, or "the Eye of Elune",[1] it was renamed when the elves' then beloved Queen Azshara ascended to the throne.[2]

The Kaldorei Empire under Queen Azshara, with Zin-Azshari and the Well of Eternity sitting near the heart

The early night elves who had settled near the Well of Eternity built a small nation called Elun'dris, or "the Eye of Elune", on the shores of the fount of power. Over time, they rigorously studied the fount's arcane energies, becoming learned sorcerers. They harnessed the powers of the arcane lake and constructed wondrous temples and roadways around it. Magic became an inseparable part of life as the night elves reveled in the power at their fingertips. Pushing the boundaries of their intellect became the driving force of their culture.

It was during this era of unprecedented growth that the kaldorei's most prolific leader came to power, Queen Azshara. Through her unbridled ambition, she elevated her people to new heights. She indulged in sorcerous pursuits and constructed a breathtaking, bejeweled palace on the shores of the Well of Eternity. The elves were so enamored with their queen that they renamed their wondrous capital Zin-Azshari, or "the Glory of Azshara", in her honor.[3]

At some point, Suramar gifted to its sister city Zin-Azshari the Javelins of Suramar, the most powerful weapons of the city, which could pierce any barrier, even one made by Queen Azshara herself.[4]

Part of Zin-Azshari burns during the War of the Ancients, as seen through the Caverns of Time.

Zin-Azshari moments from being destroyed

Zin-Azshari acted as the largest city of the largest empire in Azeroth's history. As the nation's borders expanded in all directions, Azshara herself eventually turned inward. Her Highborne, overseen by the high councilor Xavius, began to further investigate the Well itself, with the aim of unlocking all its secrets.[5][6]

This brought the elves in direct contact with the leader of the Burning Legion, Sargeras himself. He offered Azshara what she wanted, a purified world, cleansed of the lesser races, for her to rebuild as perfection. Enthralled by the demon lord's power and promises, they worked to usher forth the Burning Legion into Azeroth, and managed to open a large gateway within the royal palace of Zin-Azshari.[7] Once the demonic forces amassed, Azshara released them from the palace, and they began slaughtering the gathered kaldorei citizens outside the walls. The rest of the city was turned into a ruin, except for the Highborne's quarters.[8] This marked the beginning of the War of the Ancients, during which the Highborne would continue to try to enlarge the portal to bring Sargeras himself through to Azeroth.[7]

Later in the conflict, Dath'Remar Sunstrider and a group of Highborne seeking to defect from Queen Azshara freed the captured priestess Tyrande Whisperwind, and escaped the city. Many of them were picked off by the demons, but Dath'Remar, Tyrande and a small number of Highborne made it through to the Kaldorei Resistance.[9]

By the end of the conflict, the rebel armies managed to push through the Legion's forces and near enough to the capital city. A force consisting of the red, green, and bronze dragonflights, as well as important heroes such as Malfurion Stormrage, assaulted Zin-Azshari and the Well of Eternity by air. They met fierce resistance from the shadowbats and doomguards, but they managed to destabilize the portal. It collapsed atop Sargeras himself, who was crossing the gateway between the two realms,[7] and sucked back all the demons that had come through back to the Twisting Nether, marking the end of the invasion.

Queen Azshara held back the waves in Zin-Azshari for a small time during the Great Sundering as shown in Warbringers.

This however also pushed the Well of Eternity past breaking point, which crumbled upon itself. The resulting explosion ripped the continent of Ancient Kalimdor apart, in an event known as the Great Sundering. Zin-Azshari, caught in the center of the blast, was sunk beneath the waves[10][11] of the newly-formed Great Sea.

Azshara and her Highborne, drowning in the waters, were saved by the Old Gods in exchange for their service, and turned into the serpentine naga.[11] At the bottom of the Maelstrom, the naga built for themselves a new city, Nazjatar, from which they would rebuild their power. It would take over ten thousand years before the naga would reveal their existence to the surface world.[12] 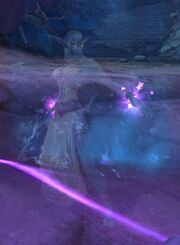 Memory of the Pact in the Drowned Market in Zin-Azshari.

10,000 years later, the ruins of Zin-Azshari are still standing in Nazjatar. Much of the ruins in haunted by Highborne ghosts.

Its buildings have existed for millennia, thus there are still ancients mechanisms that allow for stable portals.

The naga thought of reclaiming the ruined city and rebuild it with naga architecture. In order to do so, they wanted to either convince the night elf spirits there to join their side, or remove them entirely. Queen Azshara ordered them instead to leave the spirits and the city alone.[13]

The ancient city of Azshara was located at the center of Ancient Kalimdor, surrounding the Well of Eternity.[14] However, the edge of Zin-Azshari was somewhere in the region of Azshara,[15] dominating the landscape.[16] The eastern cliffs were described as overlooking the lost city.[17] Obrahiim, the Traveler was a scholar who studied its ruins in Kalimdor.[18]

In World of Warcraft: Legion, a scenario map centered around the Ruins of Eldarath depicts events (as told by Ebyssian and Leafbeard the Storied) that took place near Zin-Azshari during the War of the Ancients. It uses the map of the original Azshara zone, but the geography is the post-Cataclysm version with the goblin structures and ocean removed.

World of Warcraft: Battle for Azeroth added Zin-Azshari as ruins in Nazjatar, in the Great Sea.

Glimpses of Zin-Azshari can be seen in the background of the Well of Eternity instance, which takes place mostly in Azshara's Palace during the final battle for the city. Heroes relived the final hours of Zin-Azshari as they pushed through the area surrounding the Well, confronting Queen Azshara herself and many of her allies.

Both (burning) modern night elf architecture, mostly to the north, and intact versions of the stone buildings seen in night elven ruins, mostly to the south, are present. Lorewise the Well is much larger than how it is portrayed in-game.

The Ruins of Zin-Azshari were initially portrayed as a subzone of Azshara. It was said "The sundering caused most of the ancient city to sink to the oceans below. However, a cluster of ruins still clings to the eastern cliffs of Azshara, long shunned by night elves."[19] However, no such area appeared in-game. The Ruins of Eldarath, the Temple of Zin-Malor, and what was the Bay of Storms were thought to possibly have been part of Zin-Azshari, or perhaps the city was not represented in the in-game zone. Zin-Azshari was also known in some sources as "Azshara".[20] These points were later referenced by Malynea Skyreaver.

Mount Hyjal was also described as being a significant distance away from Zin-Azshari, with the Kaldorei Resistance never having been pushed back as far as it during the war.[6] Despite this, the zone of Azshara is located relatively close to Mount Hyjal. One theory which may explain these inconsistencies would be that ruined parts of Zin-Azshari were physically displaced long distances by the force of the Great Sundering.