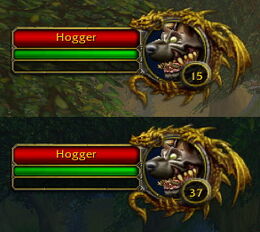 Hogger, as viewed by two characters of different levels.

Zone scaling, also known as level scaling,[1] causes mobs, quests, and loot to scale with the player character's level over a range. This allows the player more freedom to choose where they level. It was first introduced in Legion for zones in the Broken Isles, but was later expanded to include the entire game. However, scaling usually excludes content that was meant to be part of its expansion's end game: raids, heroic mode dungeons, and end-game zones such as Suramar or Mechagon.

As of patch 9.0.1, all starting zones scale from levels 1 - 10, including those for hero classes; zones from Battle for Azeroth scale to level 50; and all previous expansions scale to anywhere from level 30 to level 45. New characters can also enable Timewalking Campaigns, which causes all content to scale up to level 50.[2] This means that players can spend almost the entirety of a character's leveling journey in the same expansion, allowing them to experience stories more fully than with the previous system.

As of patch 8.2.5, most content was scaled based on the following level bands: