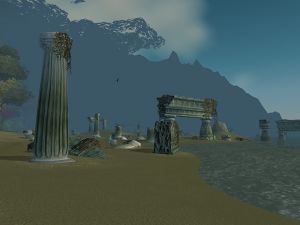 The Zoram Strand is a stretch of beach in the northwest corner of Ashenvale. While the Horde have set up a minor outpost (Zoram'gar Outpost) in the Zoram Strand, the area has fallen to the naga. The dark creatures have taken up residence, evident in their numbers and in the shipwrecks and beached sea creatures along the shore.

Near the area there was originally a night elven town called Zoram but is long destroyed and submerged beneath the seas.[1]

The Zoram Strand is also the site of the Blackfathom Deeps instance. The Deeps was once a great Night Elf temple, but now lies in ruins from the sundering. The Naga have also made their home in the Deeps, as well as the Twilight's Hammer cult who are seeking the power of the chaotic Old Gods.

In the Zoram Strand, an adventurer may find naga (Wrathtail Sorceresses and Wave Riders) in the level 18 to 19 range. There also crabs (Clattering and Spined Crawler) in the level 19 to 21 range and Mystlash Hydra (Level 20).

In the Midsummer Fire Festival, two quests take place in the Zoram Strand involving the Twilight Cult's plan to summon Lord Ahune into the world to battle Ragnaros. Two camps of Cultists spawn, one due south of the Blackfathom entrance, the other on the beach northwest of there.

A small Alliance camp with a flight path has been established near the Blackfathom Deeps instance. It also appears the models for the Naga have been updated along the coast.[2]