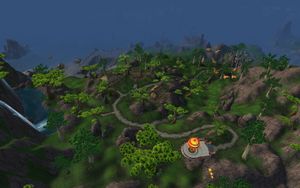 Zouchin Province is the northeastern extent of Kun-Lai Summit, down near sea level. The pandaren of Zouchin Village and Zouchin Strand call the province home, but both the Blackmane Mercenaries and the Zandalari have come from beyond the mists, slaughtering Zouchin strand and besieging the village, respectively.

The Zandalari have claimed mogu ruins east of the village as the Zandalari Vanguard, using it as a staging ground for whatever is taking place on the Isle of Reckoning, to the northeast.

Shortly before the invasion on the Isle of Thunder, the province's pandaren were escorted out of the region and the Zandalari trolls attacked and completely overran the province. Chen Stormstout also wanted to have a brewery in the area.[1] The current condition of the province is unknown, but it may have been retaken by pandaren, abandoned or still in the Zandalari hands.