From Wowpedia
(Redirected from Zukk'ash)
Jump to: navigation, search 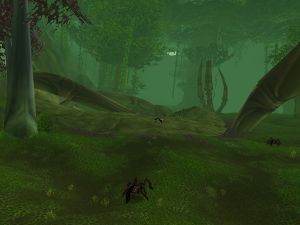 The Writhing Deep is the site of a silithid infestation in southeastern Feralas. The Zukk'ash silithid are driving the nearby gnolls into a frenzy, which is causing them to try and head north, attacking Camp Mojache.

It could also be considered to be Hive Zukk'ash, a minor silithid hive, considering the name of the silithid infesting the area.

From Lands of Mystery:

"Giant bugs, the elves said, inhabit this strange ruin in the southern part of the wilderness. I took a side trip there and looked it over, but it was no ruin - more like a purple blot on the landscape, with gigantic insect legs sticking out of it! I got close enough to see there really were massive bugs flying and crawling around this place. A hive of some sort. Ick. Insects have no history or culture, so I can't say I was particularly intrigued. I made a couple of sketches of the hive, then was on my way. I found out later that the locals refer to the insects as "silithid." This would not be my last encounter with them. Unfortunately."[1]