This article is about the lore of Zul'Aman. For the original raid instance, see Zul'Aman (removed). For the 5-man instance added in patch 4.1.0, see Zul'Aman (instance).

Zul'Aman, pronounced [ZOOL-ah-mawn] is a fortress[1] and a temple city[2] that serves as the capital of the Amani tribe, located in the southeastern portion of Quel'Thalas, on northern Lordaeron.

During the Aqir and Troll War, the aqir forces were led by a C'Thrax named Kith'ix. The Zandalari rallied the troll tribes against this new foe and summoned the loa to fight by their side, tearing through the aqiri ranks and even wounding Kith'ix, forcing it to retreat. The Amani trolls tracked Kith'ix's trail far to the northeastern woodlands, cutting through an unending mass of aqiri guardians. In a final savage battle, the entire tribe flung itself in a suicidal attack against Kith'ix and its remaining insectoid minions. Only a tiny fraction of the troll army survived. Even so, the C'Thrax succumbed to its tireless hunters.

Atop the site where they had killed Kith'ix, the trolls established a new settlement. It would one day grow into a sprawling temple city known as Zul'Aman. With the C'Thrax gone, the aqir no longer fought with as much ferocity or purpose and the war between the aqir and the trolls shifted dramatically.[3]

Thousands of years later, when the high elves were first exiled and landed in Lordaeron, they met violent clashes with the forest trolls, who viewed them as defiling their homeland. At the time of the founding of Quel'Thalas, the Amani Empire was the most powerful empire in the Eastern Kingdoms; they still held much of northern Lordaeron in their territorial grasp.[4]

Eventually, the high elves joined with the humans of Arathor and defeated the forest trolls in an immense battle that signaled the end of the forest trolls' empire. The Amani would never recover enough to extend their land beyond their home province of Zul'Aman, but they continued to be an enemy of humans and elves for thousands of years.[5]

Silvermoon itself was constructed over the site of sacred troll grounds, which earned the elves further enmity from the neighboring Amani tribe.[6]

Led by Zul'jin, the Amani trolls joined the Horde during the Second War. They did so in part to fight against the high elves, who had joined the Alliance. After the Amani, several other forest trolls joined the Horde war effort as well. They proved to be a valuable addition to the Horde. However, Zul'jin seemed to have disappeared mysteriously after the end of the war and the defeat of the Horde.[7] In truth Zul'jin had been captured by the high elves and freed by an Amani war party, and retreated into Zul'Aman to recuperate.[1]

At the behest of Budd Nedreck, adventurers entered Zul'Aman to steal the treasures within. Not only did said adventurers steal the treasures they also were able to beat back the Amani within Zul'Aman and successfully killed Warlord Zul'jin. With Zul'jin dead the halls of Zul'Aman become quiet until the coming of the Zandalari. With the aid of the Zandalari, a new troll empire is brewing, spearheaded by Warlord Daakara.

The high elves, blood elves and trolls reunion in the Amani Pass.

All of the troll tribes were invited to become a part of this new empire, including the Darkspear under Chieftain Vol'jin. However, Vol'jin has declined this offer, and instead joined forces with the Ranger-General of Silvermoon, Halduron Brightwing, and his Farstriders to counter the threat this new empire poses. In turn, Halduron has called upon Vereesa Windrunner and her rangers to join the battle, and the three can be seen planning their next move on the outskirts of Zul'Aman.

Heroes of the Alliance and the Horde then entered Zul'Aman and thwarted the Zandalari plans by killing Daakara.

Outside Zul'Aman Vereesa Windrunner, Halduron Brightwing and Vol'jin have allied to combat the new threat within Zul'Aman. The following conversation plays every five minutes. 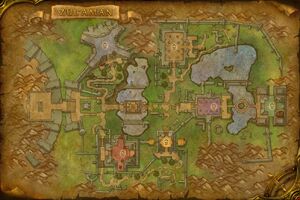 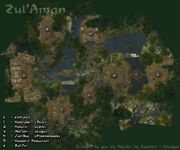 Echoes of unfulfilled vengeance linger in the one-time capital of the Amani tribe, Zul'Aman. Though the Amani trolls answered their warlord's call to arms, Zul'jin was denied his goal of restoring the empire to its former glory. Where he failed, the Zandalar tribe will succeed. Left unchecked, the united tribes will reclaim their lands and savor a merciless retribution.

Seething with hatred against his ancient enemies in the Alliance, and spiteful towards his former allies among the Horde, who chose to ally themselves with the blood elves, Zul'jin rallied an army of trolls and sealed power from the Amani animal gods within the strongest of his warriors in pursuit for revenge. Zul'jin was slain and his army scattered, but the potent magics invoked in Zul'Aman remain. Now, along with several other tribes, the Zandalar trolls, devastated by the Cataclysm, have come to see Zul'Aman as a symbol of salvation for their people. They have traveled to the ancient forests to see Zul'jin's plan brought to fruition - and, with it, the rise of a unified troll empire, filled with godlike power and prepared to claim dominion over all of Azeroth.[8]

The forest troll kingdom of Zul'Aman is a dark, primal woodland and the only place of life in the Ghostlands of Quel'Thalas. The trolls' voodoo energies permeate the climate, and ancient, stepped ziggurats rise above the canopy. Warlord Jin'zakk is rumored to command the trolls, and his witch doctors and shamans provide him with magic support.[9]

Once, forest trolls controlled a vast swath of Lordaeron. Their empire was called Zul'Aman, and the area currently known as Zul'Aman was their power center. Their dominion stretched across the continent, and they threatened the nascent human nations and the fledgling kingdom of Quel'Thalas with extinction. Eventually, the high elves traded arcane knowledge to the humans for help in defeating the trolls, and the two races bludgeoned the forest troll empire. Now, this tiny area in northeastern Lordaeron is all that remains of the trolls' continent-spanning empire.

In the years after their defeat, the trolls largely gave up their imperialist mindset, though they protect their small territory zealously. They have never forgiven the humans or the elves for their near-genocide. Warbands patrol the forest, slaying all living and undead creatures that are not trolls or natural forest beasts. They worship ancient deities, though whether these deities are the mythic Old Gods or some strange creation of their voodoo witch doctors is unknown. With Lordaeron and Quel'Thalas in ruins, the trolls move out to reclaim their kingdom.[10][11]

Any trolls encountered try to kill on sight. Explorers need to be careful but are not totally without allies in Zul'Aman. Several bands of high elves, survivors from Quel'Thalas, fled south and now wander throughout the forest. Those who stay one step ahead of the trolls survive; those who do not will learn first-hand what the cannibalistic trolls do with their victims. Scourge patrols, hunting the elven refugees, also stalk through the land.[10]

The Scourge group in Zul'Aman is led by Necromancer Ru'sad and they are having difficulties trying to end the elves as they know the forests better than the undead. Incorporeal troops such as shades or ghosts would be more helpful as the ghouls and zombies make a fearsome amount of noise trudging through the overgrowth alerting the elves. The gargoyles are somewhat more useful; they fly through the clearings and dense tangles of the jungle and allow the undead to discover refugee groups which they later kill as they sleep. The Scourge are confident that it is only a matter of time before they finally destroy all of the elves. They intend to prevent them from joining with their allies in Hillsbrad or Khaz Modan, or rally together. They intend to stop them from reviving the Sunwell.[12]

A great witch doctor, Ral'jin, rised to prominence in Zul'Aman. Ral'jin sent out hunters to capture hundreds of prisoners for use in a massive sacrifice, planning to use this ritual to summon Ula-Tek, the Serpent Goddess. This information is bad news, but the Ironforge dwarves are particularly concerned: they have seen the devastation that an elemental lord's rebirth brings, and a bona fide Old God must be even more powerful. The Dark Iron dwarves, however, are jubilant. Ula-Tek, perhaps an Old God, could serve as a companion and ally to Ragnaros. The Dark Iron sent a contingent to Zul'Aman to wish their goodwill and to protect Ral'jin as he completes the lengthy ritual.[11]

Zul'Aman in Lands of Conflict.

Forest trolls are vile creatures. They practice evil voodoo magic and worship primal beings they call the Forest Gods. Violent cannibals, forest trolls eat their own kind as well as their enemies with equal zest. The trolls joined forces with the Horde in the Second War, as the orcs promised them vengeance against Lordaeron and Quel'Thalas, but the trolls' savagery was too much even for the orcs. Due to this the trolls also hate orcs now, who they feel betrayed them. In short, forest trolls hate everyone — including each other.[13]

Witch doctors control Zul'Aman, with shamans and warchiefs in lesser leadership positions. The exception to this tradition is Warlord Jin'zakk, who rules the entire kingdom. The voodoo witch doctors wield arcane magic, while shamans provide divine support. Forest troll society revolves around hunting, spear fishing, shamanism, and voodoo. They make their capital at the Shrine of Ula-Tek, a massive ziggurat they hold sacred. Forest troll society is patriarchal, though cunning and aggressive females occasionally hold important positions. Forest trolls are primitive, possessing few metalsmithing skills and no knowledge of steam technology though they are masters with thrown weapons, be they axes or spears.

With both Lordaeron and Quel'Thalas fallen, the forest trolls see a chance to regain their old empire. They push the borders of their realm ever outward. Warbands strike south, north and west, seeking to reclaim more of their land. The trolls are myriad — almost 20.000 total, and most of them skilled hunters. They have been fighting for centuries and are competent tacticians. Alone, Zul'Aman has little chance against the Scourge. However, if approached in the right manner (by a tauren or goblin, perhaps) and promised their empire, they may be willing to join an alliance.

Like all trolls, Zul'Aman's forest trolls are lean, strong and tough. They possess long ears and noses and jutting canines. Their faces are hard and feral. Forest troll hide ranges from dark brown to light green. Many forest trolls wear primitive jewelry, often wood or bone, on their clothing, strung around their necks or thrust through their noses and earlobes. The males often maintain tall, dyed mohawks. Some paint themselves in tattoos. Forest trolls are organized into tribes, with names such as Blackleaf and Treeblight, and members of the same tribe are relatively loyal to each other.[14]

Zul'Aman is a temperate forestland of towering trees, dark shadows and ancient ruins and ziggurats. These ruins and odd, stepped pyramids remain from the days of Zul'Aman's empire, but they could be much older, even Titan or Old God remnants.[10] Elevation rises toward the north, and a hilly region dominates the Quel'Thalas border. The mighty Greenrush River begins in Zul'Aman's Lake Abassi and exits the region in the southwest crossing the Eastern Plaguelands and emptying into Darrowmere Lake. The Maisara Hills to the northeast, are sacred to the trolls.[12]

Primitive forest troll settlements are scattered throughout the region. Weathered ruins hide among the trees, covered with vines and the dust of ages.[12] Trolls guard treasure and captives, and ancient ruins of indeterminate origins dominate forest clearings.[11]