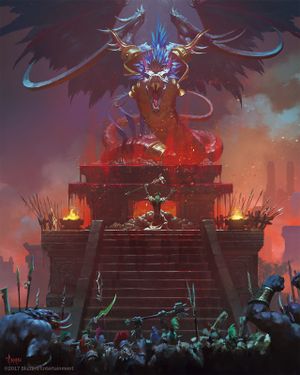 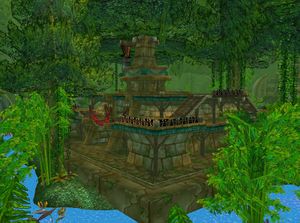 Altar of the Blood God.

1,500 years before the opening of the Dark Portal,[1] the powerful Gurubashi Empire was torn apart by a massive civil war. An influential group of troll priests, known as the Atal'ai, called forth the avatar of an ancient and terrible blood-god named Hakkar the Soulflayer. Though the priests were defeated and ultimately exiled, the great troll empire collapsed upon itself. The exiled priests fled far to the north, into the Swamp of Sorrows, where they erected a great temple to Hakkar in order to prepare for his arrival into the physical world.

In time, the Atal'ai priests discovered that Hakkar's physical form could only be summoned within the ancient capital of the Gurubashi Empire. It was in Zul'Gurub that Jin'do the Hexxer enslaved several high priests of the Gurubashi to aid him in summoning their dread god, Hakkar the Soulflayer, into Azeroth.

In order to quell the blood god, the trolls of the land banded together and sent a contingent of High Priests into the ancient city. Each priest was a powerful champion of the Primal Gods - Bat, Panther, Tiger, Spider, and Snake - but despite their best efforts, they fell under the sway of Hakkar. The champions and their Primal God aspects started feeding the awesome power of the Soulflayer.[2]

The presence of the Soulflayer presented a grave threat to the world, and, before Hakkar and his priests could dominate the continent, they were thwarted by the dedicated effort of heroes mobilized from the four corners of Azeroth. Jin'do was slain in the conflict, but his restless spirit burned with shame at his failure, and it drifted in the spirit world, seeking a way to return and a plan.

Most of the sections of the city been caved in such as Shadra'zaar and Altar of Hir'eek.

Jin'do forced his way back to Azeroth to call on allies old and new: the worshippers of Hakkar, the exile Zanzil the Outcast, and even Hakkar's former enemies among the Zandalar tribe. Together, they will rebuild Zul'Gurub - not for the glory of their defeated god, but to take his brutal power for their own, and see the troll race stand triumphant over a broken world.[3] 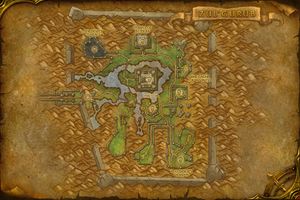 Map of the Zul'Gurub instance.

The beginning of the great Gurubashi civilization lay in Stranglethorn's far eastern reaches. Few trolls live here now — only those Gurubashi who research and wish to preserve the ruins from the encroaching jungle.[4]