For his biography, see Zul.

Zul, Reborn is the sixth boss in Uldir.

Once the proud leader of the Zanchuli Council, highest advisors to the kings of Zandalar, Zul was praised as the greatest of prophets. Now, the dark prophet has turned on King Rastakhan and would see a true troll empire rule the world once again, even if it means submitting to the blood god: G'huun. 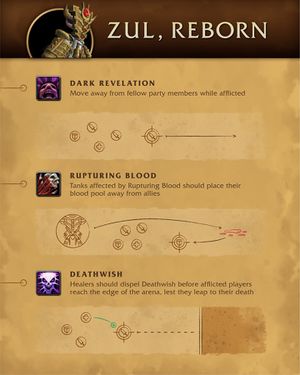 Overview of tactics for the Zul, Reborn fight.

Stage One: The Forces of Blood

Princess Talanji yells: Zul?! How is he alive? I saw him die by my father's hand!

Brann Bronzebeard yells: I recognize the ugly on that troll. What is Zul up to?
MOTHER yells: Analysis indicates high levels of corruption. Hypothesis: G'huun reanimated this specimen and enhanced it. Further testing required.

Princess Talanji yells: It does not matter how he returned. My knife will send him back to de abyss.

Brann Bronzebeard yells: Eugh, so he's a reanimated corpse? Let's put 'im back in the ground.

Aggro
Come, fools! I've already seen your end.
Everything is as I have foreseen!

Dark Revelation
De power of G'huun will be your doom!

Locus of Corruption
G'huun's blood flows through my veins! Tremble before my power!

Deathwish
Witness your end and despair!

Killing a player
Weak. Just as I predicted.
You never had a future!

Death
Zul yells: Wait... Dis was not the future I was promised...
MOTHER yells: Warning, significant threat of contamination beyond this point. Quarantine protocols prevent me from proceeding.

Princess Talanji yells: De rest is up to us. We will put an end to G'huun's disease.