Zuldazar (or Zuldazar City),[1] the city of gold[2] (pronounced "zool-DUH-zahr") is the seat of the Zandalari Empire and the most ancient city in the world.[3][4] This massive, golden temple city is considered the jewel of all troll civilizations.[5] Built atop the highest peaks of Zandalar in a series of giant ziggurats,[6] its majestic pyramids tower above the jungle canopy and its indomitable navy controls the South Seas. It is here that, every six years, envoys from all the troll tribes convey in order to share information and discuss matters that may affect the entire troll race.[7] Recently, the kingdom has faced attacks by forces both within and without, with the city's gates assailed by the rising tide of a relentless enemy, the blood trolls.[8] 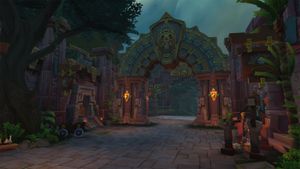 Nestled deep in Zandalar's primal jungle, Zuldazar is a remnant of the once-mighty Zandalar empire. A vast coastline surrounds Zuldazar to the south, east, and west, offering bountiful opportunities for fishing, boating, swimming, and treasure hunting. To the north are the marshland of Nazmir, and the deserts of Vol'dun.

High above the jungle canopies, the Golden Throne serves as Zuldazar's city center, with some of the most breathtaking views in the region. It is from here that Rastakhan, king of the Zandalari, rules. A vast, ancient cityscape of interconnected terraces sprawls out below, dotted with temples devoted to the loa, which are maintained by their loyal servants.

Visitors can find anything they need for an extended stay in the heart of Dazar'alor at the center of the city. Facilities include an inn, portals to all major Horde cities along with Dalaran, profession trainers, a bank, training dummies, vendors, and more. It’s easy to get lost this ancient, multileveled city—but that only emphasizes its vastness and grandeur.

There are thousands of steps throughout Zuldazar. One needs to keep an eye out or risk plummeting into one of the many thunderous waterfalls surrounding the city. Worshipped as deities by the Zandalar trolls, many of the temples dedicated to them can be often found on high ground or mountain peaks, which are viewed as sacred ground by the devout. In the southern part of city at its lowest point is the expansive Port of Zandalar. It is here that the Zandalari berth their mighty fleet and traders from around Azeroth sell their wares and services.

Zandalar's rich tapestry of flora and fauna deserve research and cataloguing. The Zandalari have shown themselves to be able beast masters, having domesticated many of the creatures that roam the land. Some of these serve as helpful allies to the Zandalari; others prove obstacles to those who would seek to exploit the jungle's resources. Tamed Ravasaurs, Brutosaurs, Pterrodax, and Direhorns make up just a portion of their menagerie. There are countless other wild beasts that make their homes in surrounding jungles, from Muddy Riverbeasts to Roaming Nibblers.

Following the Golden Road from the city and up into the mountains to the west will eventually lead to Atal'Dazar. These ancient pyramids have served as the resting place for Zandalari kings for millennia. With each passing ruler, new rooms are constructed to house the deceased’s vast wealth.[9]

Zuldazar has mountains reaching altitudes so high that it is hard for most species to breathe.[10]

On primordial Kalimdor, a series of peaks and plateaus located in the southern part of the continent was home to many Wild Gods. Due to their reverence for these beings, which they called "loa", the early trolls settled on the holy mountain range and gave it the name "Zandalar", building small encampments upon its slopes. The most powerful group of trolls was called the Zandalar tribe. Its members claimed nearly all of Zandalar's tallest plateaus, believing them to be sacred ground. Atop the highest peaks they built a small cluster of crude shrines, which over time grew into a bustling temple city known as Zuldazar.[11]

Zandalar has accepted the tortollan as an exception to their troll-only policy due to the useful information they provide the trolls. The Zandalari did try to get rid of them once, but the tortollans managed to change the mind of then-King Tezlekhan using their political influence and information they had gathered on the royal family.[12]

The Cataclysm inflicted great damage on Zuldazar,[13][14][15] causing the great palace of King Rastakhan to list to one side, the forum to be flooded with sea water, jagged fissures tearing up the tiles, and high tides coming up to the market awnings.[16] But while there was some damage, the city was rebuilt, after Zul's departure.[17]

Years later, as conflict once again erupted between the Alliance and Horde, the blood trolls made greater and greater incursions into Zuldazar from Nazmir. Princess Talanji, frustrated from her father's inadequate response to this threat, sought outside help from the Horde, but she was intercepted by the Alliance. After the Horde saved Zul and Talanji from the Stormwind Stockades, Zandalar let the Horde establish an embassy within the pyramid of Dazar'alor. Some time later, Zul launched an insurrection against Rastakhan. With Zandalar opening its borders to non-trolls, other races such as tol'vir and tuskarr traveled to Zuldazar's port to do trade.[18]

Zuldazar was raided by the Alliance during Battle of Dazar'alor which resulted in the death of King Rastakhan and the crippling of the Golden Fleet. 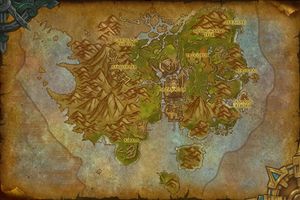 Zuldazar includes standard troll architecture: It features a winding, tiered structure of walls and buildings. Thousands of cannibalistic jungle trolls inhabit these ziggurats. Zuldazar is the seat of King Rastakhan and hosts a gathering of all the troll tribes every six years; the trolls meet to share information and plot (most likely).[19]