Zuramat the Obliterator is a voidlord boss located in Violet Hold. 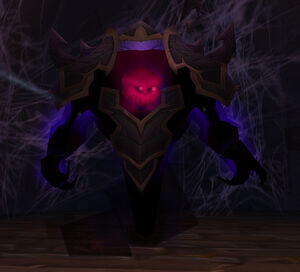 Zuramat in World of Warcraft.

It took one hundred of Dalaran's finest to subdue Zuramat; it took twice as many to clear the carnage from the killing field. The Obliterator's malevolence gives pause even to mad Malygos, who considers the void lord's appetite for magic distasteful. But genocide makes strange bedfellows.

Zuramat is a large Voidlord that is caged on the west side of the Violet Hold. Throughout the fight he will summon Void Sentries that will hit the party with a Shadowbolt Volley every few seconds - the only way to kill them is to get the Void Shifted debuff, which is obtained after getting hit by the boss with his Void Shift attack. This gives you a 15 second window to kill the void adds. Another strategy is to burn down the boss as fast as possible and ignore the adds - which will depend on your healer's effectiveness, as the damage being inflicted to the whole party can become massive towards the end of the fight.

For this boss you should place the tank in the center of the room and the rest of the group should make a half circle around the tank about 15 yards back, facing the broken wall. He will approach through the broken area of the wall and the tank should grab him and bring him to the center.

The Shroud of Darkness buff on the boss can be removed by the following:

This should help avoid anyone getting the healing debuff, and allow relatively uninterrupted dps.

He also casts Void Shift on one random player, this is a debuff that allows that player to see the Void Sentries that are holding the void spheres, this player should kill every sentry they can during the 15 seconds that the debuff lasts.

The Void Sentries have very little HP, so light AoE is usually sufficient to kill the Sentries while Void Shifted. If you need to single target the sentries, a targeting macro can be very useful. (/tar Void Sentry)

Unholy Death Knights can throw up

[Anti-Magic Zone], if so talented, for a protection effect. AMZ will mitigate 75% of the incoming shadow damage until it absorbs 10000 + (DK's AP * 2) damage in total, making the healer's job more bearable.

Release
I am... renewed.

Whisper
Gaze... into the void.

If your party wipes after defeating Zuramat the Obliterator, he will be replaced with the Void Lord during subsequent attempts.

Zuramat appears as one of the bosses that can be encountered in the Dalaran Heist single-player experience in the Rise of Shadows expansion for Hearthstone.