Zzeraku was a nether dragon taken captive by Sintharia and used in her experiments at Grim Batol to create a new flight of dragons. 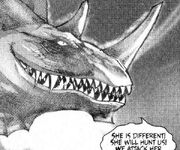 Zzeraku and his companion Valoku were two nether dragons who spent most of their time hunting for prey in the vicinity of Hellfire Peninsula prior to the reopening of the Dark Portal. They were well known to a tribe of Broken who were often the targets of their hunt. He is distrustful of many races, as the mortal races either try to kill or enslave his kind.

When the surviving demons of the Third War reopened the Dark Portal, Tyrygosa, a blue dragon, was drawn to Outland by a strange yet familiar source of magic. Zzeraku and Valoku came across Tyrygosa after she had been struck down by the Death knight Ragnok Bloodreaver and was captured by a tribe of Broken. Valoku advocated that they help her as she was like them and could answer their questions but Zzeraku didn't trust her. An argument was sparked between the two Nether dragons that distracted the Broken enough for Tyrygosa to escape. Tyrygosa recruited the help of the two nether dragons in locating and rescuing her missing companion Jorad Mace but was mislead and attacked by Zzeraku before he flew off abandoning her. Valoku flew off behind him.

Zzeraku encountered Tyrygosa again when she was later brought by Valoku to their Dragon lair. From Tyrygosa, Zzeraku discovers that he and his dragonflight are descendants of Deathwing. With the promise that Tyrygosa would free their brethren from their enthrallment, they partook in the battle for the Dark Portal against Ragnok Bloodreaver's forces.

Tyrygosa convinced Valoku and Zzeraku to battle their own people in an attempt to free the nether dragons from the control of Ragnok, who was leading an attack on the Dark Portal. Valoku eventually placed himself in front of Tyrygosa to protect her from an attack by the enthralled Nether dragons. His shield spell eventually faltered to their attacks and he burned away. This drove Zzeraku in a rage which caused him to start firing spells randomly at Valoku's killers. Eventually, one spell collided with the energies of the Dark Portal and destroyed it.

Following the defeat of Ragnok Bloodreaver's army, Tyrygosa attempts to free the dragons Ragnok enthralled but Kadavan informs her that those enthralled under his devices gradually weaken until they eventually burn out. Nothing can save them unless an extremely powerful source of arcane power can revitalize the dragons enough to free themselves. Tyrygosa, Kadavan, and Zzeraku open a dimensional rift to Azeroth and bring a group of enthralled Netherwing dragons to the Nexus where they absorb its magical energies. Yet Zzeraku and the Nether dragons grow mad with power and frustrated with everyone they've ever encountered trying to use them, decide to be masters of their own destinies and conquer Azeroth for themselves. Tyrygosa tries to reason with Zzeraku, telling him that by following Deathwing's path, Azeroth will rise against them and lead to their destruction. Though conflicted with Tyrygosa's sincere concern for his kind, Zzeraku believes that only by gaining power can he safeguard his people. The Netherwing dragons attack the blue dragonflight, and in the midst of the chaos, Malygos awakens from his slumber. In his insanity, Malygos misinterprets the nether dragons' arrogant proclamations of being the embodiment of the Nexus and absorbs them and their power.

The dragon's Nether-warped physiology began to affect the Spell-Weaver himself, ultimately helping him regain some of his lost sanity.[1] With his sanity restored to him, Tyrygosa's patron declared war on mortal spellcasters, sending his flight out to do his bidding. Only Zzeraku managed to escape, berating himself for not trusting Tyrygosa's warnings. He tried to seek out Tyrygosa's council on what to do next but as he roamed Azeroth, he was eventually captured by Zendarin Windrunner who trapped him in Balacgos's Bane.[2]

Zendarin delivered the dragon to his mistress Sinthria. Sintharia, now calling herself Sinestra, little by little fed the nether dragon to her newest creation, the twilight dragon Dargonax. Zzeraku, immobilized deep within Grim Batol, suffered greatly but refused to have his will broken. He was inspired by the draenei priestess Iridi's attempts to free him, and flew into a rage when he saw harm done to her — breaking free of his bonds and engaging the twilight dragon in a battle that led them out of the halls of Grim Batol. There Dargonax fully absorbed the dying Zzeraku, who had decided to try and save Iridi at the cost of his own life. His sacrifice was not in vain, however: He catalyzed the minor defective part within the twilight dragon that Iridi and her allies were able to exploit and finally defeat Dargonax.[3]

Zzeraku appears as a legendary card for the warlock class in the Descent of Dragons expansion for Hearthstone. His flavor text reads: "The extra Z is for "zesty.""