This affects a number of things:

We should probably switch to producing the icons at 2x the intended pixel size (so e.g. 32x32 for images intended to be displayed in-line with text), and let the wiki software resize them down for low-density displays. Resizing pixel art is, however, tricky, so that might degrade the image quality on older displays. (Ideally, it would be neat to tell mediawiki something like "if you need a 16x16 version of this image, use this other file instead," but I'm not sure how viable that is from a mediawiki and/or gamepedia perspective)

Yes! The same thing should apply to the {{Source inline templates}} (Warcraft RTS) templates as well unless icons like the WoW expansions are created for them. — Surafbrov T / P / C 00:52, 19 March 2018 (UTC)

I'm not against it, but that means redoing every single icon on wowpedia, does it? Should ask User:Klakmuf, User:Kandooww, User:Coobra and the other people doing icons for their opinion Xporc (talk) 08:25, 19 March 2018 (UTC)

(screenshots: 2x 1x). In general, if we want to keep the 18px target size, it might be better to compare downsampling from 36px and 72px images (rather than 32 and 64), but the resized versions don't seem to be too bad on this image (pixel-art faction/expansion logos with transparency might fare worse). — foxlit (talk) 22:48, 19 March 2018 (UTC)

Not against it, seems to work the best overall. Plus we already resize the 64x blizzard icons for items from just linking items like so:

[Azerite]. — Surafbrov T / P / C 01:23, 21 March 2018 (UTC)
I think that resizing artifacts are minimized when the source image is an integer factor larger than the target size, so going for 2x/3x/4x of the display size would probably be better. Using 2x puts the icon creator in control of at least one of the icon sizes, while 4x means that almost everyone would see a software-resized version of the icon. NPC/Race icons are currently 18x18px in size, hence the suggestion to use 36x36 for those. Of course, if we're happy with the results of resizing down from 64x64, we might as well go with that. — foxlit (talk) 23:15, 21 March 2018 (UTC)

In all seriousness, I don't actually intend to create any of those icons. In many of the examples Surafbrov highlights above, we already have higher-resolution images that can be sampled down to currently-used size by the wiki software, so it's mainly a matter of pointing the templates at the right files. For race and npc icons, where we do not have 2x versions ready to go, I don't think we need to do anything other than just make sure the relevant templates allow 2x images to be used, and make a clear suggestion for the dimensions of any new icons people make. If someone feels inclined to go through the old icons, they're free to do so; otherwise, we're no worse off than we are now. — foxlit (talk) 21:59, 20 April 2018 (UTC)
Have we settled on a new size to use? -- DarkTZeratul (talk) 21:53, 20 April 2018 (UTC)

(For NPC icons,) 64x64 resized down to 18x18 seems like a fine starting point: it seems to look okay in Coobra's examples above, gets us parity with Blizzard icon sizes, leaves some room for future pixel density improvements, and keeps the option of switching to resizing down to 16x16 later if we decide we want a uniform icon size between items and NPCs. — foxlit (talk) 22:08, 20 April 2018 (UTC) 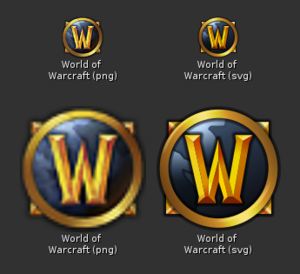 After talking on Slack about the deal with the removed subzones for zone templates, KD3 pointed an example for the links on his sandbox page but I have also noticed the icons section. For the faction logos specifically, what about we start using SVG? It works very well no matter ldpi or hdpi. — Surafbrov T / P / C 22:50, 26 April 2018 (UTC)

Just setting an example about SVG vs PNG: if available, it is best to use SVG for icons that come in that format. An example of this is the Alliance and Horde icons (provided with links above) and the WoW Icon which is used in the template {{Wow-inline}}. — Surafbrov T / P / C 08:37, 23 May 2018 (UTC)