Mia Greymane is the wife of King Genn Greymane and current queen consort of Gilneas. 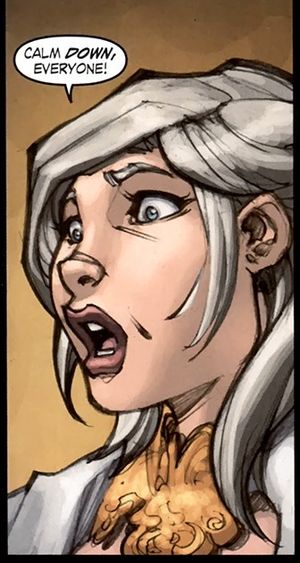 Mia in Curse of the Worgen.

Mia met her future husband Genn at the Royal Aderic Banquet, where he was smitten by her. They later married for love, rather than political reasons.[1]

Three days before the worgen attack on Gilneas City, Mia learned about the apparent death of Halford Ramsey from his colleague Cox. Later, during a dinner she scolds her husband for spending too much time in his observatory (where he meets with Belysra Starbreeze, unbeknownst to his wife), neglecting his own family instead, especially Liam, who looks at him as an example. Later on, she witnesses the quarrel between Genn and Vincent Godfrey about the release of Darius Crowley.

She oversaw the evacuation of her people after the Cataclysm struck and the Forsaken attacked her nation.[2]

At some point after Duskhaven is evacuated, Mia points players toward Genn Greymane to evacuate Greymane Manor in carriages. She notes that he is often stubborn.

During the exodus to Darnassus, Mia and her daughter were aboard the Elune's Radiance while Genn was on another ship. The fleet was hit by a powerful storm generated by the Cataclysm, and the Elune's Radiance started to sink. Having a leg broken during the storm, Mia could not move and Tess remained with her refusing to leave, so they both risked drowning. Genn, refusing to lose the last two members of his family, assumed worgen form and joined the rescue efforts of the night elf sailors from his ship. He reached their room inside the ship and brought them out, carrying Mia in his arms and Tess on his back, then he dropped them into the sea, where they were reached by the night elves lifeboats. Mia's broken leg was healed by the druids, and after the storm, both the women reached Teldrassil safely.[3]

During the War of the Thorns, the Alliance was busy evacuating refugees from Ashenvale and Darnassus to Stormwind City. With King Genn Greymane preoccupied with advising King Anduin Wrynn for the upcoming war, a respected authority figure was needed to calm the Gilnean people at the Howling Oak and organize their evacuation to Stormwind City. Queen Mia was the most suitable person available and was eager to fulfill the role when Genn asked her to. When Mia witnessed the direness of the situation, Mia was determined to aid in the night elven evacuation as well. Mia was in Darnassus when the Horde launched their assault on Teldrassil. She was seriously wounded trying to protect Finel, a night elven infant, from collapsing rubble. She was rescued by her husband Genn and her wounds healed by Astarii Starseeker. Although she told Genn to prioritize Finel's safety over hers, Genn stubbornly rescued the both of them.[4][5] With the world tree destroyed, the Gilnean moved to Stormwind where Mia helped priests tend to the injured Gilnean and night elven refugees in the Cathedral of Light.

Remain calm! We will take care of everybody.
We have carriages at the ready, we're just waiting for King Greymane's word.
We will overcome this. Do not give into panic.